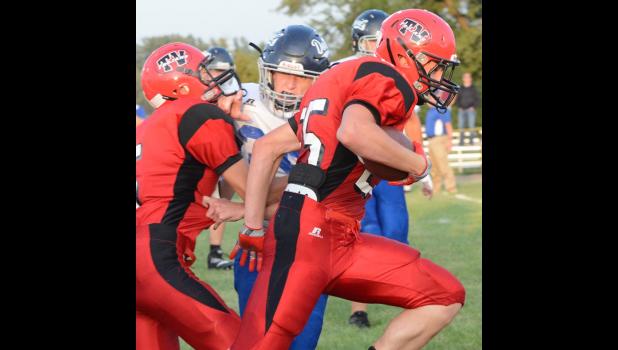 By:
Nate Troy
BUFFALO CENTER -  It took the Eight-Man No. 8 Turkey Valley football team a couple minutes to get on track, but once they did, they were tough to stop.
The Trojans raced to a 44-8 halftime lead over North Iowa Friday and cruised to an impressive 64-8 victory to move to 3-0 overall and 1-0 in district play. TV will host Riceville on Friday, Sept. 15.
“The one thing I was not sure of before the game did occur,” TV Coach Mark Scott said. “The long bus ride had an effect on how sharp we played early in the game. The players played through and ovecame several assignment breakdowns and a season high eight penalties.
“The senior trio of Will Einwalter, Cale Reicks and Braeden Baumler continue to produce a balanced offense along with sophomore quarterback Ethan Leibold.
“On defense, sophomores Luke Mueller, Kannon Leuenberger and Dylan Elsbernd continue to improve and help control the interior of our defense.The defensive backs of Einwalter, Reicks and Seth Huinker held North Iowa to three of 10 passing for 29 yards and one interception, which was Cale Reicks’s 65-yard pick six,” Scott said.
The Trojans tallied three scores in the first period to go ahead 20-0. Einwalter and Reicks both snagged touchdown passes from Ethan Leibold. Braden Baumler scored on a five-yard scamper.
Turkey Valley tacked on three scores in the second period. Leibold scored on a one-yard plunge, Reicks reached paydirt on a 49-yard run and Einwalter caught a 77-yard strike from Leibold.
In the third period, Einwalter scored on a five yard run. In the final period, Reicks had a 65-yard interception return and Dylan Elsbernd scored on a 27-yard run.
Turkey Valley finished with 264 yards rushing. Baumler had 69 yards and one touchdown on 12 carries. Einwalter had 67 yards and one score. Cale Reicks had 62 yards and one touchdown. Dylan Elsbernd had 46 yards and one score, and Ethan Leibold had 25 yards and one touchdown.
Leibold completed four of eight pass attempts for 141 yards and three touchdowns. Einwalter had two catches for 112 yards and two scores. Reicks had one catch for 22 yards and one score.
On defense, Cale Reicks tallied 10.5 tackes, including seven solo stops and had one interception return for a score. Leibold had six tackles. Kannon Leuenberger had five stops. Baumler and Luke Mueller each had four tackles. Will Einwalter had 3.5 tackles.