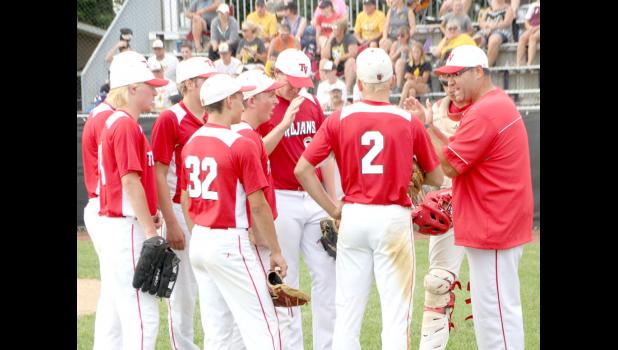 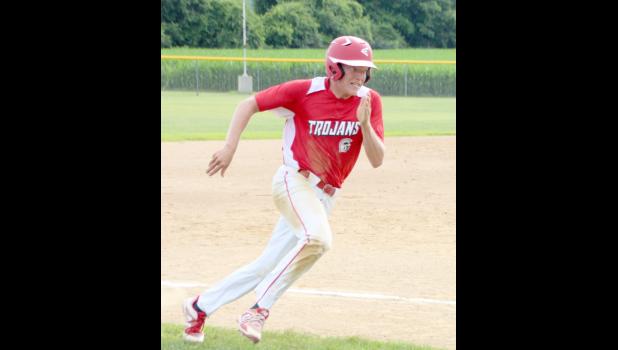 By:
Nate Troy Sports Editor
NEW ALBIN - Solid team play in all phases (pitching, hitting and defense) helped the Turkey Valley baseball team notch a 4-1 win over Ed-Co on July 10 in the first round of the Class 1A District 7 Tournament at Shooky Fink Field in New Albin.
Squaring off against South Winn in the district semifinal on July 12, the Trojans were unable to contain the Warriors as South Winn won, 13-3, in five innings. The loss ended TV’s season at 13-19 overall.
TV 4, E-C 1
Playing the Ed-Co Vikings in the first round of the district tourney on July 10 in New Albin, the Trojans plated four runs in the third and held on for a 4-1 win.
“This was a good way to start the district tournament,” TV Coach Dan Stepan said. “We got great pitching, defense and timely hitting.”
Ed-Co got on the scoreboard first with one run in the bottom of the first. Cory Kloser singled to drive in Spencer Staner.
The Trojans bounced back with four runs in the third. Keegan Balk led off with a double, and he scored on a triple by Kyle Langreck, who scored a couple pitches later on a wild pitch. Mason Goerend singled and moved to second on a sacrifice bunt by Elliott Dietzenbach. Goerend scored when Evan Drilling reached second on an error. After Luke Anderson walked, Simon Schmitt singled to drive in Drilling.
Cale Reicks notched the win on the mound. He pitched six and two-thirds strong innings, allowed only three hits, one earned run, three walks and struck out six.
Mason Goerend finished with two singles, one run and one stolen base. Evan Drilling scored one run and had one stolen base. Cale Reicks tallied one double.
Simon Schmitt had one hit and one run batted in. Keegan Balk had two hits, including one double, and one run scored. Kyle Langreck had one triple, one run and one RBI.
Score by innings
TV   0 0 4 0 0 0 0 - 4
EC   1 0 0 0 0 0 0 - 1
SW 13, TV 3 (5in)
In the district semifinal on July 12, South Winn took a 6-0 lead after two innings and sailed to a 13-3 win in five innings.
Turkey Valley cut South Winn’s lead to 6-2 in the top of the third when Cale Reicks doubled to drive in two runs. The Warriors answered with two runs each in the third and fourth and three in the fifth.
“This was not the way you want to end, but I have yet to coach a season in my 22 years of coaching three sports that has ended how I’d like,” Stepan said.
Despite the loss to South Winn, the coach gave kudos to his players.
“I’ve said this from day one,” Stepan said. “This is the nicest group of seniors to coach. They are great kids that have bright futures in front of them.
“It was easy to come to the ballpark with these guys. It makes a summer so enjoyable when you have a fun group to be around. Some of them have been playing varsity for a few years, and they were playing the best baseball of their careers here at the end. That’s all you can ask for, which is to improve every day and play your best baseball on the way out.”
Evan Drilling was three-for-three at the plate with one double and one RBI. Mason Goerend scored two runs. Elliott Dietzenbach had one run. Cale Reicks tallied one double and two RBI.
Kannon Leuenberger was the losing pitcher. He went one and two-thirds innings, allowed six hits, six earned runs, one walk and struck out one. Josh Vsetecka tossed two and one-third innings, allowed five hits, five runs (three earned) and two walks. Elliott Dietzenbach pitched one-third of an inning, allowed one hit, one unearned run and walked one.
Score by innings
TV   0  0  2  0  1  - 3
SW  1  5  2  2  3  - 13