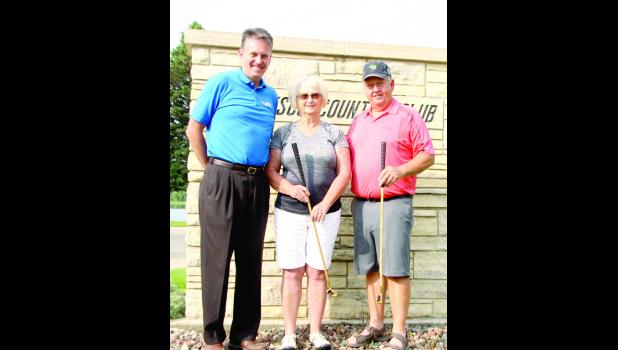 Swestkas are the hole-in-one couple

By:
Nate Troy Sports Editor
CRESCO - They might not refer to themselves this way, but you could definitely call Ron and Joyce Swestka of Cresco two ace golfers. After all, the couple achieved every golfer’s dream last year: a hole-in-one.
Ron carded his first hole-in-one on hole eight at the Cresco Country Club on July 12, 2017 while golfing with his wife, Joyce. About two months later, Joyce shot her own hole-in-one on Sept. 19, 2017 on hole three at the Cresco Country Club during Ladies’ Day.
“I was using an eight-iron, and the hole was around 140 yards,” Ron said. “The ball landed in front, it bounced off the stick and we both saw it go in.  I felt pretty good as soon as I hit the ball. This was my first hole-in-one, and it was exciting.
“I never thought I’d get a hole-in-one. I’ve been golfing for about 30 years. It’s always the ultimate goal, but you never know if it’s going to happen,” Ron said.
He added that he and Joyce are able to play a lot more golf in recent years after moving to a house across the road from the Cresco Country Club.
While Ron was obviously thrilled to record his ace last year, he didn’t spread the news around right away.
“After I shot it, the clubhouse was closed because it was in the evening,” Ron said. “We mentioned it to the bartender at the time, but she said the hole-in-one might not be valid because you need to have someone other than your wife in your golfing group.”
While this rule might seem unusual or downright silly to most people, there is some validity to it.
According to the website golfweek.com, the official hole-in-one rules note, “Someone must be with you to attest to witnessing your hole-in-one. Also, that someone must be acceptable to the USGA (United States Golf Association). For example, if your four-year old son or daughter is with you, it could be a challenge to verify and validate your shot. You would have to settle for the personal satisfaction of making a once-in-a-lifetime shot without official recognition.”
Even though the USGA might not recognize Ron’s ace last year, Bryan Sheehy of H&S Motors convinced Ron his accomplishment was worthy of a gold putter, which he gave to him on July 13.
Last September, Sheehy gave Joyce a gold putter sponsored by H&S Motors. When Joyce recorded her ace, she was golfing with a foursome.
“A few people knew about my hole-in-one last year, but because of the USGA’s rules about that, I just let it go,” Ron said. “I thought maybe I’d get another one (after that), but it hasn’t happened yet. For both Joyce and I to have a hole-in-one in the same year was ironic.”