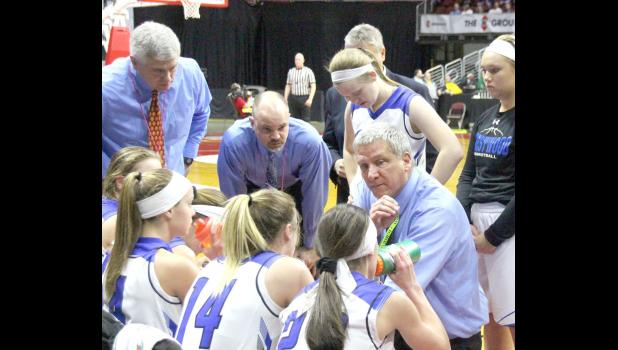 By:
Nate Troy Sports Editor sports@crescotimes.com
CRESCO - Hanging up the coaching whistle is usually not an easy decision for most people.
This was certainly the case for Doug Sickles, who announced on May 14 that he is retiring as coach of the Crestwood varsity girls’ basketball team after 15 seasons on the sidelines.
From 1999 to 2003, Sickles coached the Cadet ninth grade girls’ basketball team before becoming the varsity coach starting with the 2003-2004 season. Saying that Sickles has had some success guiding the varsity girls’ team would be a huge understatement. In 15 seasons, he posted a 222-117 overall record, led the Cadets to the State Tournament four times (2014, 2015, 2017, 2018), and he guided the Cadets to NEIC titles three times (2008, 2017, 2018). During the 2017-18 season, he led the Cadet girls’ team to its first Class 3A State Championship, most wins in a season (26) and first undefeated season (26-0).
Before coming to Crestwood in 1999, Sickles was an assistant coach at Algona Bishop Garrigan and West Hancock from 1986 to 1999. Before graduating from UNI in 1986, he served as a volunteer assistant basketball coach at Wapsie Valley from 1984 to 1986.
Sickles said the decision to step aside now was not an easy one.
“Since the basketball season, I’ve been going back and forth with the decision (to retire as coach),” Sickles said. “My love of basketball and the kids at the school made the decision hard. I’ve been coaching basketball, not just as a head coach, since 1984 when I was in college.
“From November to March every season, your life gets put on hold. Coaching basketball is almost like a second full-time job. Before every game, the coaches watch tapes of other teams and breakdown what they see.
“Even though I’ve thoroughly enjoyed coaching basketball, I owe my wife, Marcia. She has been very supportive of me letting me follow my dream, and now it’s time to step aside. We have a daughter, Madison, who will be a senior at Grandview College (in Des Moines) next year. I have hardly been to any of her basketball games, which hasn’t been fair to her. My decision (to retire as coach) came down to wanting to spend more time with my family,” Sickles said.
He noted that he wanted to announce his decision now so Crestwood could find a new coach before summer activities start, such as basketball team camps. Sickles noted the best aspect of coaching was the kids.
“The best thing about coaching basketball at Crestwood was the great kids who have gone through the program,” Sickles said. “This community has a love of basketball. I have so many terrific memories of not just wins and losses, but more about the relationships. I’ve tried to push the girls to become the best they can be on and off the court.
“We’ve had some tremendous kids at Crestwood, which includes off the court. That for me will be the great thing I’ll always remember. I’m also a coach who absolutely loves practice. I will miss trying to get the kids out of their comfort zone to do something they didn’t think they could do.
“I can’t say enough good things about the  community support for girls’ basketball at Crestwood. The kids at Crestwood have high expectations of themselves, and they are not afraid to put in the time to reach those expectations. You don’t get that everywhere,” Sickles said.
He noted that when he was growing up, he always wanted to be a teacher and coach.
“What drew me to coaching were the coaches I had growing up,” Sickles said. “They were great role models, and because of them, I thought coaching would be a great profession.”
While Sickles guided many successful Cadet girls’ basketball squads, he was quick to give kudos to others.
“Crestwood girls’ basketball is not about me,” Sickles said. “It’s a lot bigger. Jim  Obermann (who coached from 1988 to 2003) did a great job of starting the tradition of Crestwood girls’ basketball. Hopefully, I carried on that high standard, and I hope the next coach does that, too. Crestwood basketball is about the kids who come through the program.”