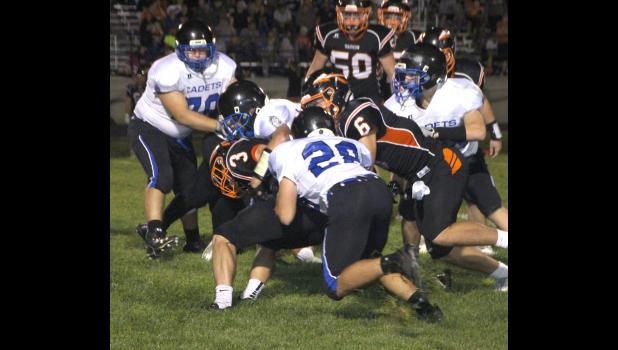 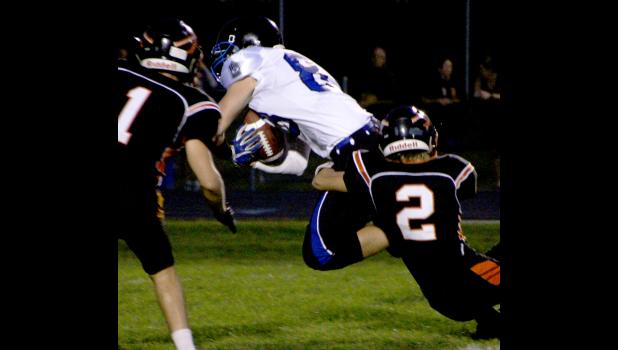 By:
Nate Troy Sports Editor
WAUKON - A second half rally by the Crestwood varsity football team fell short on Aug. 31 against Waukon as the Indians held on to down the Cadets, 22-7.
The loss dropped Crestwood’s overall record to 1-1 while Waukon improved to 1-1. Crestwood will host Waverly-Shell Rock on Sept. 7 at 7:30 p.m.
The Class 2A defending champion Waukon Indians built a 14-0 halftime lead before the Cadets closed the gap to 14-7 early in the third period on a four-yard touchdown run by Reece Wilson and the extra point by Harry Kitchen.
Midway through the third period, Waukon pushed its lead to 22-7 on a one-yard run by Ethan  O’Neill and a two-point pass from Brock Hatlan to Reed Kelly. With under four minutes left in the fourth, the Cadets moved the ball from their own 43 to the Indians’ eight-yard line before Waukon intercepted a pass in the end zone with 1:24 to clinch the win.
“We need to improve on all aspects of our game,” Crestwood Head Coach Skip Eckhardt said. “We played all right (at times). We went for it on fourth down (early in the first quarter), but we slipped and fell and couldn’t get the one yard we needed (for a first down).
“We’re not going to throw in the towel. We are going to regroup and get better. That’s why we play a tough schedule. We had some opportunities, but we need to catch the ball. We’ll go to the drawing board and improve,” Eckhardt said.
Crestwood tallied 209 total yards, including 105 yards rushing and 104 yards passing. Waukon posted 242 yards, including 136 yards through the air and 106 on the ground.
Reece Wilson paced the Cadets on offense with 114 yards rushing and one touchdown on 19 carries.
Crestwood quarterback Jon Henry completed 14 of 29 pass attempts for 104 yards. Garret Ollendieck had three catches for 42 yards. Carter Henry tallied three receptions for 21 yards.
On defense, Ollendieck had three solo stops and five assisted tackles. Bryer Thompson had four solo tackles and three assisted stops. Kade Munkel had five solo stops and three assists. Logan Albert had four solo stops and five assists.
Harry Kitchen had two kickoffs for 87 yards, and he kicked one extra point. Kade Munkel had five punts for 183 yards.
Shane Vokaty returned four kickoffs for 77 yards, good for an average of 19.3 yards per attempt.