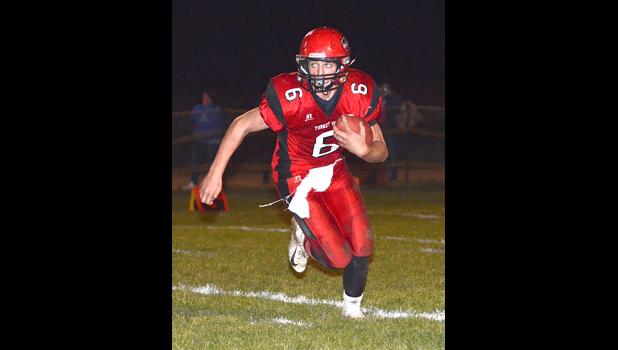 By:
Nate Troy Sports Editor
JACKSON JUNCTION - Three fourth quarter touchdowns by Rockford allowed the Warriors to edge the Turkey Valley football team, 64-58, on Oct. 26 at home in the first round of the Eight-Man playoffs.
The loss ended Turkey Valley’s season at 8-2 overall, including 6-1 and a share of first place in the district. Rockford (9-1) will play at Don Bosco (9-1) in the second round of the playoffs on Nov. 2.
Turkey Valley Head Coach Mark Scott gave the Trojans kudos for a stout effort against a strong Rockford squad.
“We came up on the short end of a well-played, hard-fought high school football game,” Scott noted. “Our players gave it their all against a much larger and more physical Rockford team.
“(TV quarterback) Ethan Leibold showed why he is one of the best quarterbacks in Eight-player football (241 yards passing, 128 yards rushing, three touchdown passes, two rushing touchdowns). He made great decisions all night and ran the offense well. We scored 58 points, so it was obvious that our offense played well.
“Defensively, Rockford’s 225-pound tailback (Kaden Lyman, 206 yards rushing, five touchdowns) was more than our smaller players could handle for four quarters. We did create three turnovers. Ethan Leibold had a fumble recovery. Billy Swestka intercepted a pass before halftime, and Seth Huinker made a great play in the end zone to stop a drive. It was the end of a great year for Turkey Valley football,” Scott said.