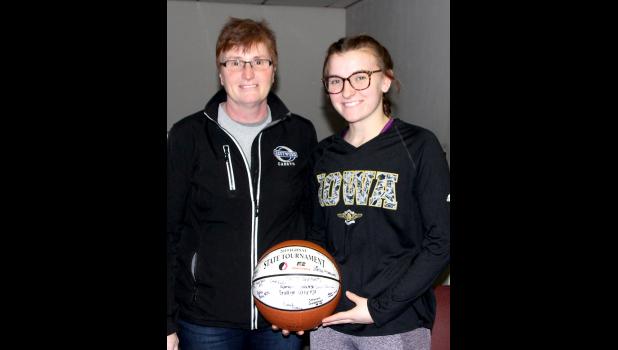 By:
Nate Troy Sports Editor
HOWARD COUNTY - When it comes to high school basketball in Howard County, you could say that the Pisney and Lloyd families know a thing or two about shooting hoops, especially when their basketball roots go back for more than 60 years.
Shelby Pisney, a senior on the 2019-20 Crestwood girls’ basketball team, is currently carrying on the proud family basketball tradition. Hoop fans will no doubt remember Shelby’s older sister, Shannon, who played for the Cadets from 2014-18, is currently a sophomore on the Grandview University women’s basketball team in Des Moines.
During her years at Crestwood, Shannon helped lead the Cadets to three State Tourney berths (2015, 2017 and 2018) and one State Title in 2018. Shannon was named to the 2018 All-State Tournament Team, earned First Team All-NEIC honors in 2018 and she was named Third-Team All-State in 2017. Shelby and Shannon’s older sister, Sammi, also played for Crestwood during the 2008-09 season.
While the Pisney sisters have been a big part of Crestwood’s success in recent years, the basketball family lineage goes back all the way to the 1950s. Sammi, Shannon and Shelby’s mother, Luann (Balik) Pisney, played basketball at Notre Dame High School from 1982 to 1986. During her senior year, 1985-86, Luann averaged 30 points per game, was named to the All-Upper Mississippi Conference Second Team and had a career high 43 points during a win over North Winn that season. Luann’s sister,  Sheila Grabau, hit the hardwood at Notre Dame from 1983 to 1987.
Judy Lloyd, Shelby’s great aunt, graduated from Lime Springs High School in 1958. Judy played a key role in helping Lime Springs place third in the district tournament in Mason City in 1958, where the team beat Kensett, 96-65, in the consolation finals. After high school, Judy played on the Women’s AAU basketball team and the Look Magazine team from 1958 to 1966. Shelby’s grandma and Judy’s sister, Joyce Lloyd Pisney, also played basketball at Lime Springs from 1956 to 1959.
In addition to playing basketball at Lime Springs, Joyce Lloyd Pisney also played on the Look Magazine team with Judy for a short time. According to the March 3, 1960 Lime Springs Herald, “Joyce Lloyd appeared on the Look (Magazine) team as a defensive forward. She had  14 points per game with the City League team as their leading scorer.”
Luann’s memories
Luann Pisney noted that one reason she liked playing basketball in school was that it was more fun than doing chores.
“We were farm kids (growing up),” Luann said. “Playing basketball was a good way to get out of doing farm work. We had a basketball hoop attached to the grain bin and we practiced outside. My first two years at Notre Dame, we played six-on-six basketball and I was a forward. The last two years, we played five-on-five.
“With six-on-six basketball, you could only dribble twice before you had to either shoot the ball or pass it. The five-on-five game was more fast-paced and easier for me. One thing I really liked about playing basketball was the competition. I also liked driving to the basket as well as getting steals on defense. I enjoyed getting to know people from other schools (while playing games). I’ve made a lot of friends playing basketball,” Luann said.
Shelby’s inspiration
Shelby said that watching Shannon play basketball was a big factor that drew her to the sport.
“The biggest thing that got me excited about basketball was Shannon,” Shelby said. “Playing basketball with her as a kid was fun. Seeing how well she played the sport really got me interested in basketball. We’d play basketball in the driveway sometimes or else go up to the Cresco Fitness Center to play.
“I went with Shannon to some of her basketball lessons with the coaches during the off-season. I learned different ball-handling skills and different moves to get open on offense.
“I really like how fast-paced basketball is and how aggressive you can be playing the sport. With other sports, you can’t be as aggressive with the other team. I like driving to the hoop but I also enjoy dishing the ball to my teammates (in the paint) or kicking the ball out to an open teammate (for an outside shot),” Shelby said.
Although Shelby was on the Cadet JV squad when the team won the State Title in 2018, seeing that team win it all really motivated her for the future.
“Seeing the team win State gave me a lot of expectations for when I would get to the varsity team,” Shelby said. “Every day when I walk into the high school gym, I look up at the poster (of the State Championship team) and I see Shannon. It helps me realize that we can reach that goal this year. It helps to have high expectations and it shows me that I can keep working hard.
“This year Coach Dale Dennler has been harping on defense a lot. We want to have a strong defensive team. We are always strong on offense but some nights, we struggle on defense. I think our stronger suit (as a team) is our man-to-man defense because that way we can eliminate all the girls on the court,” Shelby said.