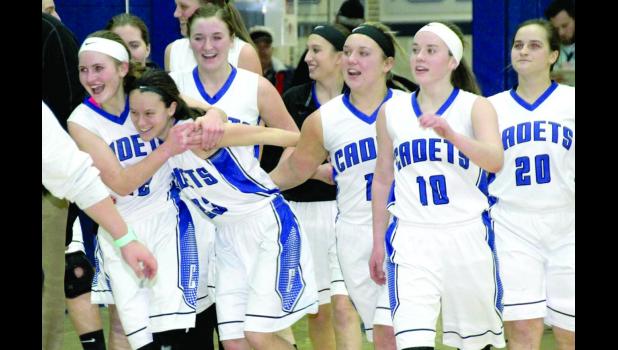 By:
Nate Troy
CRESCO - It was a great weekend for the Class 3A No. 6 Crestwood varsity girls’ basketball team as the Cadets tripped Waverly-Shell Rock, 55-53, Friday; and they bounced Lansing Kee, 61-53, Saturday to improve their overall record to 8-0.
During Saturday’s game against Kee, Ellie Friesen tallied 21 points to bring her career total to 1,004 points. Friesen scored 403 points as a freshman and 481 points as a sophomore for Osage before coming to Crestwood this school year as a junior.
Cadets 55, W-SR 53
Crestwood junior Ellie Friesen nailed two clutch free throws with 8.8 seconds left Friday at home to help the Cadets hand Waverly-SR its first conference loss in four years, 55-53.
Friday’s conference game was a hard-fought back-and-forth contest for all four quarters. Crestwood held a 14-10 lead after one period before the Go-Hawks took a slim 31-30 edge at halftime.
The third quarter saw both teams trade buckets as Waverly-SR took a 40-39 lead going into the fourth. In the final period, the lead changed hands nine times.
The Go-Hawks took a 53-50 advantage with 53 seconds remaining before Crestwood’s Brynn Bodermann nailed a three-pointer from the left wing with 40 seconds left to tie the game at 53. After a defensive stop, the Cadets got the ball back with under 20 seconds left before Ellie Friesen was fouled with eight ticks remaining. Friesen calmly nailed the charity shots to give the Cadets a 55-53 lead. The Go-Hawks missed two shots attempts in the final eight seconds as Crestwood held on for the well-deserved win.
“Our girls did a good job of keeping their composure throughout the game,” Cadet Coach Doug Sickles said. “The game went back-and-forth for a long time. I told our assistant coaches (Dale Dennler and Oakleigh Natvig) and our girls that was what basketball is supposed to be. It was a fun game for the players, fans and even the coaches.
“The three-week layover (from the last game on Dec. 13) hurt us. We didn’t have our legs going as much as we usually do, but we’ll get back into playing shape. I commend every girl on our team. The game wasn’t always pretty, but we got the job done. The kids played their butts off. Defensively, I was pleased for the most part. We got into foul trouble a little bit, but I thought our kids followed the game plan well,” Sickles said.
The coach had confidence Ellie Friesen would hit her free throws with eight seconds left.
“I expect Ellie to be clutch like that,” Sickles said. “She is a solid player who likes the pressure. Brynn also hit a big three-pointer for us late. She knew what the score was (in the final minute), and she was able to knock down that three-pointer,” Sickles said.
Shannon Pisney led the Cadets with 18 points, including one three-pointer, had 13 rebounds and three assists. Ellie Friesen had 16 points, including two three-pointers, five assists and four rebounds.
Brynn Bodermann had six points on two three-pointers. Sharon Goodman tallied six points, seven rebounds and two blocks. Emily Friesen had four points and eight rebounds. Kaylee Thomas had three points on one three-pointer. Tracy Martinek had two points and three rebounds.
Score by quarters
WSR  10   21   9   13 - 53
CW    14   16   9   16 - 55
Cadets 61, Kee 53
Taking on a solid Lansing Kee team Saturday on the road, the Cadets went on a 14-7 run in the fourth period to down the Kee Hawks, 61-53.
Crestwood led Kee 19-13 after one period before Kee tied the score at 37 at halftime. The Cadets held a 47-46 lead heading into the fourth.
“In the first half, I was not overly pleased with our defensive effort,” Coach Sickles said. “I give credit to Lansing Kee because they did a lot of things well. We just weren’t sharp in the first half.
“Defensively, we mixed things up a little bit in the second half. Offensively, we missed some shots, but for the most part I was happy with our offense.
“Seeing Ellie Friesen surpass 1,000 career points is a great accomplishment. Our whole team played well overall,” Coach Doug Sickles said.
Shannon Pisney led Crestwood with 26 points, had 12 rebounds, five steals, two blocks and two assists.
Ellie Friesen had 21 points, including three three-pointers, and had two rebounds.
Sharon Goodman had seven points and three rebounds. Emily Friesen had four points and three rebounds.
Brynn Bodermann had three points, two assists and two steals. Tracy Martinek had one rebound and one steal.