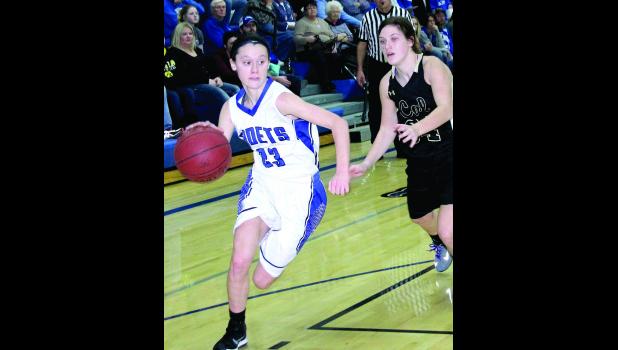 By:
Nate Troy
CRESCO - Exceptional team play on defense and offense helped the Class 3A No. 3 Crestwood varsity girls’ basketball team earn impressive wins last Monday against MFL-Mar-Mac (85-46); last Tuesday against New Hampton (63-34); and Saturday versus Caledonia (55-45) at home.
Playing at Waverly Friday, the Cadets were unable to hold off the Go-Hawks as W-SR tripped Crestwood, 52-48.
Cadets 85, MFL 46
Playing at Monona last Monday, the Cadets jumped out to a 27-11 first period lead en route to a convincing 85-46 win..
“One big key for us was getting starting strong on offense,” Cadet Head Coach Doug Sickles said. “Our offense really carried us, and we also got some stops on defense. Our girls did a good job of spreading the ball around.”
Brynn Bodermann tallied 21 points, including three three-pointers, for the Cadets. Ellie Friesen had 21 points, including two threes and six assists.
Shannon Pisney racked up 17 points, 17 rebounds, four assists and four steals. Sharon Goodman had 11 points, two rebounds and one block. Tracy Martinek had 10 points, seven rebounds and one block.
Abbie Burke had two points and one rebound. Kaylee Thomas had three points on one three-pointer and three assists. Emily Friesen had three rebounds and three assists. Lauren Reicks had three rebounds and two assists. Blair Bodermann and Karley Freidhof each had one rebound.
Score by quarters
CW   27   27   23   8 - 85
MFL 11   15   10  10 - 46
Cadets 63, NH 34
Taking on New Hampton last Tuesday, the Cadets built a 35-13 halftime lead and never looked back during a 63-34 win over the Chickasaws.
“Our defense carried us against New Hampton,” Sickles said. “We struggled a little bit on offense with our field goal shooting, but we did make 20 of 24 free throw attempts, which helped us.
“Ellie Friesen and Shannon Pisney really carried us on offense. It was a collective team effort for us on defense where we played extremely well,” Sickles said.
Ellie Friesen tallied 23 points, including three three-pointers, had six rebounds, six assists and six steals. Shannon Pisney tossed in 20 points and six rebounds. Sharon Goodman had four points, six rebounds, four blocks and one assist.
Brynn Bodermann had four points, two rebounds, two assists and two steals. Emily Friesen had four points, including one three-pointer, five rebounds and three steals. Blair Bodermann had four points.  Kaylee Thomas had three points on one three-pointer. Tracy Martinek had one point, one rebound and one steal. Lauren Reicks had one steal.
Score by quarters
CW   19   16   16   12 - 63
NH    8     5     9    12 - 34
W-SR 52, Cadets 48
Playing at Waverly Friday, the Cadets took an 18-8 lead after one period before the Go-Hawks rallied late to win, 52-48.
The score was tied at 26 at halftime before Crestwood took a 37-36 lead after three periods. W-SR went on a 16-11 run in the fourth to earn the win.
“This was a back-and-forth game,” Coach Sickles said. “Waverly’s size bothered us in this game more than the previous game (in January). We wanted to get the ball up and down the court, but Waverly didn’t. They slowed the game down, which made the size come into play more.
“Waverly just made some shots down the stretch and we didn’t. We didn’t play our best, but we still had our chances to win the game at the end,” Sickles said.
Shannon Pisney led the Cadets with 18 points, including two three-pointers, had 12 rebounds and two assists. Ellie Friesen had 12 points, five rebounds, five assists and two steals.
Sharon Goodman had 12 points, four rebounds and two blocks. Emily Friesen had three points on one three-pointer and five rebounds. Brynn Bodermann had three points on one three-pointer and three assists.Tracy Martinek had two rebounds.
Score by quarters
CW   18   8  11   11  - 48
WSR  8  18  10   16  - 52
Cadets 55, Caledonia 45
The Cadets bounced back from the loss to Waverly-SR with a 55-45 win over Caledonia Saturday at home.
“We were trying to mix up our defense in the second half,” Sickles said. “We settled into a man-to-man defense, and we were able to take away what Caledonia wanted to do in the second half. We also hurt Caledonia by getting into some of the offensive sets we like.
“We don’t have any (video) tape on Caledonia, so we haven’t seen them play before Saturday. Our girls gave an outstanding effort for playing on back-to-back nights,” Sickles said.
Shannon Pisney chalked up 25 points, including 11 of 14 from the free throw line, had eight rebounds, two assists and one block. Ellie Friesen had 11 points, including two three-pointers, seven steals, six rebounds and five assists.
Brynn Bodermann had seven points, including one three-pointer, three assists and two rebounds. Sharon Goodman had six points and seven rebounds. Emily Friesen had four points, seven rebounds and two assists. Tracy Martinek had two points, four rebounds and two assists.