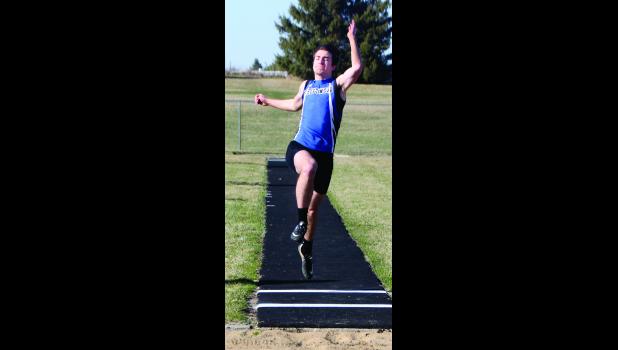 By:
Nate Troy Sports Editor
WAUKON - The Crestwood boys’ track team competed well at the Waukon Early Bird Track Meet on April 1 as the Cadets finished fifth overall with 80 points and placed in the top four in 10 events.
Cadet senior Kade Munkel won gold in the long jump with a personal best distance of 21 feet. Justin Nibaur took second in the 3200 (11:01.08 seconds) and the 1600 (5:10.85). Ethan Mast placed third in the 400 dash in 56.72.
Crestwood’s 4x100 relay (47.28) and 4x100 weight person relay (54.8) both placed second. The Cadets took third in the shuttle hurdle (1:10.18) and third in the 800 sprint medley relay (1:47.43).
“It was nice to finally be able to get back on the track after missing last year’s track season,” Cadet Boys’ Coach Chris Sullivan said. “It was your typical first meet of the season where we had a chance to see what our kids could do in certain events.
“The biggest thing we wanted was our kids to compete throughout the meet. Kade Munkel won the long jump with an impressive jump of 21 feet, which is the best of his career and something we will look to build off of moving forward.
“Justin Nibaur took second in the 3200 and 1600 but because of the competitor Justin is, he knows he can run better times than he did in both races. Our 4x100 relay team took second place as well. I like what I saw from Ethan Mast and Ayden Easley in the 400 meter dash and they really pushed each other to the finish line.
“Our throwers performed well and scored in both the shot and discus, which was nice to see. They will only continue to improve as they are very raw in the standpoint of getting reps. The shuttle hurdle team took third place but we will need to have a couple guys drop their times moving forward if we want to get where we need to be.
“We put Travis Brace in a tough spot with a bunch of events in order. We wanted to see what the 4x200 team could do. If it wasn’t for the dropped handoff, we would have won that race. This affected Travis in the 110 meter high hurdles and the 400 meter low hurdles but it (competing) was something Travis and the  coaches wanted to see early on in the season.
“We will make adjustments there just like we will with a lot of events. We thought the kids competed well in their races but we need to continue to compete outside of our races in terms of warming up better, especially on a night where it was pretty cold out," Sullivan said.