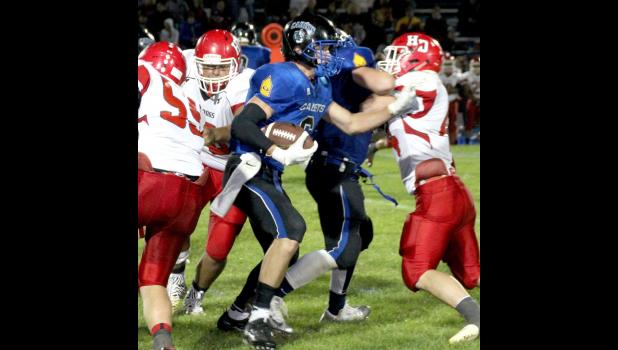 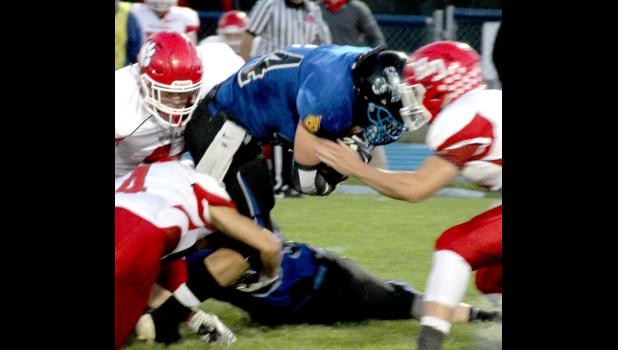 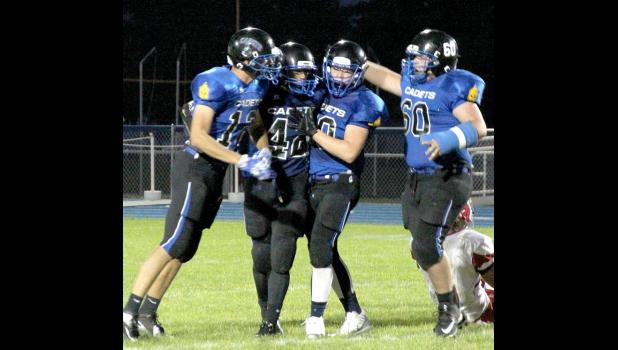 By:
Nate Troy
CRESCO - After taking a 21-point lead early in the second quarter, the Crestwood varsity football team withstood a second half rally by Hampton-Dumont before notching the game-winning touchdown on a five-yard run by Clayton Ollendieck in the fourth to tally a well-deserved 35-28 district win.
The victory improved Crestwood’s overall mark to 1-2 and 1-0 in District 2. The Cadets are tied with Clear Lake, Osage, and New Hampton in the district at 1-0. Crestwood will host Clarion-GD (0-3, 0-1) on Friday, Sept. 15 at 7:30 p.m. for its homecoming game.
Crestwood appeared to have Friday’s game against H-D in command after taking a 21-0 lead midway through the second quarter. Chris Guest scored twice on runs of 23 and 35 yards, and Jon Henry punched the ball in from one yard out. However, two late scores by the Bulldogs cut the Cadets’ lead to 21-13 at halftime.
Late in the third period, H-D tied the contest at 21 on a five-yard scamper by Dustin Miller and a two-point conversion run. Not to be outdone, the Cadets answered with a 41-yard drive to go ahead 28-21. Shane Vokaty scored on a three-yard run, and Clayton Ollendieck nailed the kick with 29 seconds left in the third.
With 8:56 left in the fourth, H-D knotted the score at 28 on a three-yard run by Parker Juhl and the extra point kick. However, it didn’t take the Cadets long to respond. Crestwood capped a 60-yard march with a six-yard touchdown run up the middle by Clayton Ollendieck at the 7:42 mark. He also nailed the extra point kick to give Crestwood a 35-28 lead.
The Bulldogs advanced to Crestwood’s 42-yard line on their next drive before Cadet senior Dawson Rasmusson recovered a fumble with 3:17 left to secure the win.
Crestwood Head Coach Chris Lentz was pleased to see his team bounce back after the Bulldogs tied the game twice in the second half.
“We wanted to come out in the second half and come down and score,” Lentz said. “Hampton-Dumont stopped us (on our first drive in the second half) before they scored to tie the game. Then the game went back-and-forth a little bit.
“In the second half, we jumped into our power package by spreading out on offense, and we had Clayton Ollendieck running it (from the backfield). That softened up Hampton-Dumont a bit on defense, and it worked well for us. We probably should have run that power package in the first half, but sometimes in the heat of the battle, you don’t remember to run that.
“We had a few opportunities with some long passes where we didn’t quite make the catches. We also gave Hampton-Dumont a couple scores before halftime, which I didn’t like to see,” Lentz said.
Despite giving up some big plays to the Bulldogs, the coach gave his team kudos for not giving up.
“Our kids stepped up, especially in the second half,” Lentz said. “Hampton-Dumont is a tough team to defend with their triple option on offense. That’s why we run that play, too. You have to play assignment football, and everyone has to do his job, or else (your opponent) can hurt you.
“Hampton-Dumont has some big guys up front (on the offensive line), and they were pounding the ball on us. Fortunately, we were able to get the go-ahead score in the fourth before we recovered their fumble to seal the deal.
“Our defense played well (later in the game). In the first half, our defensive ends weren’t doing what they needed to do (to slow down H-D), but we got that fixed at halftime. Hampton-Dumont has one heck of a quarterback (Hunter Sutter). He’s hard to tackle. We just need to do a better job of tackling and getting him to the ground,” Lentz said.
The coach noted the game against Decorah on Sept. 1 gave the Cadets the confidence they needed going into Friday’s game.
“After the Decorah game, we knew what we could do (on offense and defense),” Lentz said. “Our guys are confident with their abilities. We moved the ball well in the first half (against H-D). We might have scored a little too easily a couple times in the first half, and we got a little bit lackadaisical.
“(H-D) kind of punched us in the mouth and got us on our heels before we snapped out of it and got after it again. It doesn’t matter if we win by one point or one hundred, we’ll take the win,” Lentz said.
Cadet statistics
The Cadets racked up 360 total yards on offense, including an impressive 272 yards rushing. Chris Guest led the way with 127 yards and two scores on 15 carries. Clayton Ollendieck tallied 80 yards and one score on eight carries.
Crestwood quarterback Jon Henry completed six of 11 passes for 88 yards. Clayton Ollendieck had three catches for 76 yards.
On defense, Dawson Rasmusson led the team with 13.5 tackles, including nine solo stops and one fumble recovery.