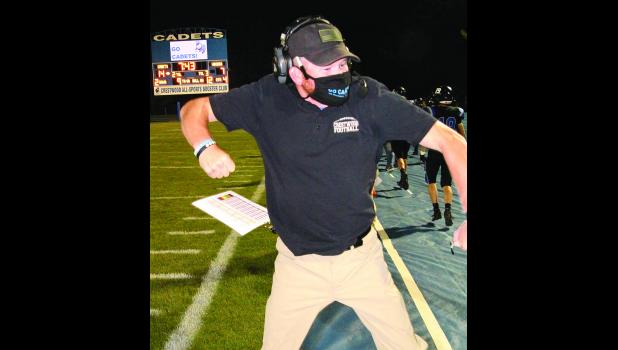 By:
Nate Troy Sports Editor
CRESCO - A familiar coach will be roaming the sidelines at Cadet football games this fall in a new role.
It was recently noted by the Howard-Winneshiek School District that Justin Denner, former assistant coach, was named the new varsity head football coach at Crestwood High School.
Denner was an assistant varsity football coach for the Cadets from  2015 to 2020 and he guided the freshmen and Junior Varsity teams from 2012 to 2014. He has also served as an assistant wrestling coach since 2012 and an assistant baseball coach since 2014.
Denner is anything but a novice when it comes to football. He played linebacker and long snapper at Waverly-Shell Rock from 2004-07 before playing the same positions at Wartburg College, where he earned three letters and earned academic all-conference honors for three years before graduating in 2012.
“I’m super excited for the opportunity to be the head coach,” Denner said. “To have the chance to take hold of a program like Crestwood’s, which has been historically good, is great. I’m honored to be given the shot (to be head coach).
“I played football in high school and college and it’s always been my first love. I always knew that I wanted to try to have my own (football) program but I didn’t know where that might be. I fell in love with Crestwood when I came here (in 2012), so I really wanted it to be here. The fact that the opportunity came here allowed my dreams and wants to mesh together. It’s been something I’ve been working really hard for,” Denner said.
He noted that the strategy that goes into football was the aspect that drew him to the game.
“I really enjoy the strategy behind things in football,” Denner said. “With football, you need to have all 11 guys doing their job (to be successful) and that’s always fascinated me.
“It’s interesting that you can have two teams doing two different things and both of them can have the same amount of success. You can have one team running the ball 40 to 50 times a game be in the state championship game against a team that throws the ball 50 times a game. Whatever talent or skill level is on a team, you’ve got something there where you can learn from that to make your team successful.
“Football comes down to tackling and blocking but there are different ways (to use as a coach) to get to the same spot. I love the chess match aspect of football. There’s a fine line in football (with strategy) because you don’t want to over-think things. You need to understand what you think your opponent might do and what you can do.
“Are you going to be worried too much about your opponent or are you going to go with your best stuff? The decision-making that goes with football is awesome because it changes on every play and in every game. Football is never boring,” Denner said.
Teaching math, as well as coaching, has never been boring for Denner. During his senior year at Wartburg in January 2012, he was student-teaching when he saw an opening for a math teacher at Crestwood the following school year.
“I told my cooperating teacher about the job opening at Crestwood and he asked if I had applied to it,” Denner said. “I told him no, not yet. He told me to stop what I was doing, go online and apply. He told me that I might not have another opportunity in the area (of northeast Iowa). So I applied. Mr. Felderman, who was the principal at the time, came up to interview me and offered me the job.
“Because I was from Waverly, I was familiar with the town of Cresco and the area so I figured it would be a great place to start teaching. A few years into the job, I realized that I really like it here. I fell in love with Cresco and I met my wife, Alicia, here. Cresco has a lot of great things going for it,” Denner said.