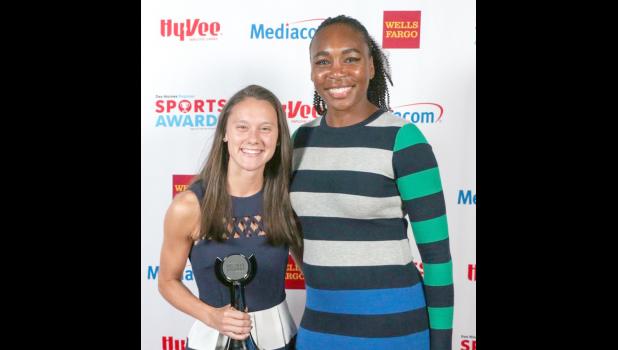 By:
Nate Troy Sports Editor
DES MOINES - Ellie Friesen, a 2018 Crestwood High School graduate, was named the Des Moines Register Female Athlete of the Year during an awards ceremony held in Des Moines on June 23.
One of the speakers at the event was Venus Williams, the No. 9 ranked women’s tennis player in the world, and winner of seven Grand Slam singles titles.
Friesen said she was thrilled to earn the award from the Des Moines Register.
“It felt amazing to accomplish something so big with the combination of all my sports,” Friesen said. “I pride myself in being able to perform at the highest level for each of them, so to be awarded for the hard work felt great.”
She added that many people played a big role in her success.
“I matured greatly throughout my high school career and valued the support I got from my family, coaches, teammates, and community,” Friesen noted. “I also know that my faith in God grew, and I began to understand his purpose for creating me to be an athlete.
“I put in a lot of extra miles and spent countless mornings working out and also went to practice after schools. That took a lot of discipline, but the accomplishments I received my senior year made it all worth it,” Friesen said.
During the 2017-18 school year, Ellie excelled for the Cadets in cross country, girls’ basketball and track. During the 2017 cross country season, Ellie placed first at the Class 2A State Qualifier meet and helped the Cadets qualify for State as a team. At the State Meet, she placed third individually and helped the team finish fourth.
During the basketball season, she played a key role during Crestwood’s 26-0 season, which concluded with the school’s first State title in girls’ basketball. At the State Tourney, she set a record for most assists in one game (18) and had the most total assists during the tourney (37). She was also named Class 3A All-State Tournament Captain, earned First Team All-State honors by the Iowa Girls’ Coaches Association, and she was named First Team All-Northeast Iowa Conference.
At the 2018 State Track Meet, she won gold in the 800, 1500, 3000 and she ran the anchor leg on the first place distance medley team. Her times in the 1500 and 3000 at State were the seventh fastest times in the nation. During her high school career, which included her first two years at Osage, she qualified for the State Track meet in 16 events. The Crestwood girls' track team tied for second place at the State Meet with Dubuque Wahlert.