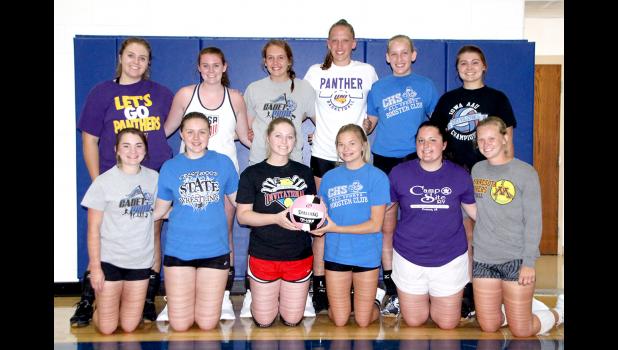 By:
Nate Troy Sports Editor
CRESCO - The Crestwood varsity volleyball team recently concluded a solid 2018 season, which saw the Cadets post a respectable 15-19 overall mark, including a 3-3 record and third place in the Northeast Iowa Conference.
The 2018 squad included eight seniors: Trista Foster, Amiah DeWolf, Alexandria Johnston, Samantha Balk, Brooklyn Ferrie, Ashley Voves, Cassie Hosek and Hallie Frohn.
Others on the varsity included: Laken Lienhard, junior; Memphis Sweeney, junior; Sharon Goodman, junior; Mikayla Lane, sophomore; Keelee Andera, junior; Emma Rissman, junior; and Alexis Hoppe, junior.
Head Coach Robin Gossman said he liked the way this year’s team matured during the season. The 15 wins the Cadets posted this season was one more win than they recorded in 2017. Crestwood’s record last season was 14-20.
“We continued to grow and learn as a team,” Gossman said. “This year we tried many different lineups, which can tend to frustrate some teams, but this team adapted and stayed positive.”
Gossman was pleased to see the Cadets earn third place overall in the Northeast Iowa Conference this fall.
“Finishing third in the conference means a lot to the program,” Gossman said. “Even though we did not win our conference match against Waverly-Shell Rock (in September), winning one game during the match speaks highly of our accomplishments.
“We also avenged a loss to Charles City in the NEIC Tournament on Oct. 13, and that was a big win. We did not play well (overall) during the conference tournament, but to win the last match of the day against Charles City was big,” Gossman said.
The coach also praised the seniors.
“This senior group has had more success than any senior group (at Crestwood) over the past 12 years,” Gossman said. “They were quiet leaders, but generally, they got the job done.
“This group spent a lot of time helping to develop the volleyball program. They spent time with the middle school on multiple Fridays.
“Overall, I am very proud of what this team accomplished. I hope they are equally as proud. Going back 12 years, no senior group has celebrated more victories in a two-year span than this group,” Gossman said.
Looking to the future, the coach noted, “Next year, we need to focus on quickness and explosiveness. Volleyball is a very quick paced sport, and we were slow to react. We will need to spend more time in the weight room.”