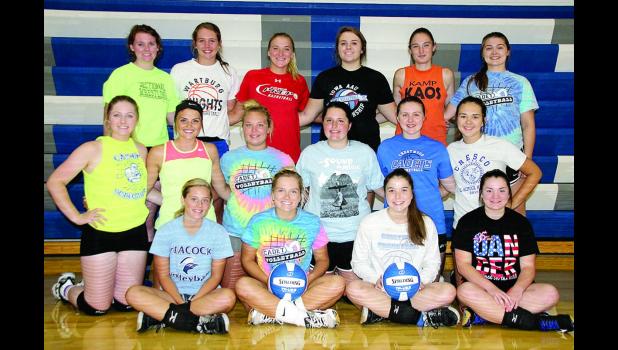 By:
Nate Troy
CRESCO - After losing its first four matches of the season, the Crestwood varsity volleyball team bounced back to post a solid 14-20 overall mark in 2017.
Crestwood opened its season by losing four matches to strong teams including: Tripoli, Sumner-Fredericksburg, South Winn and Waverly-SR. The Cadets rebounded strong at their home tournament on Sept. 9 by winning four matches
After a loss to New Hampton, Crestwood beat Clear Lake and won four of five matches at the Waukon Tourney. The Cadets lost seven straight before winning three in a row against Waukon, Saint Ansgar and Oelwein.
Competing at the NEIC Tournament, the Cadets won two of six matches. Facing a strong Osage team in the first round of the regional tournament, Crestwood battled hard before losing in three games.
This year’s Crestwood team featured 10 seniors including: Shannon Pisney, Jacey Bina, Danielle Ahern, Taylar Pecinovsky, Audrey Grinhaug, Emma Mannery, Maddie Steffen, Brynn Bodermann, Kaylee Thomas and Kayla Lentz.
Juniors on the team included: Brooklyn Ferrie, Amiah DeWolf, Samantha Balk and Ashley Voves. Sophomores Sharon Goodman and Memphis Sweeney also competed on the varsity team this year.
Crestwood Head Coach Robin Gossman said the team’s spirit throughout the season impressed him.
“One of the things I was most impressed by was the willingness to learn, and the overall team spirit,” Gossman said. “No matter where you go, you will have some of the ‘me’ factor, but I did not see much of that (this season).”
Gossman said he was happy to see the team become more knowledgeable as the season progressed.
“One area where I saw the team improve involved the team knowing more about the game (as the season went on),” the coach said. “Volleyball is a more complex game than most people think, and little things can make a huge difference.”
Gossman noted he would like to see more athletes play a bigger role on the team next year.
“We will need to be more diverse (as a team next year),” Gossman said. “This year our offense relied heavily on a couple players. If we want to compete in this conference, we need to have several girls step up and make big contributions.”
The coach is optimistic the team will build on this year’s success in 2018.
“I think we can finish as good as if not a little better (next year) with off season work,” Gossman said. “We need to get in the weight room and work there and we also need to spend extra time in the gym. The only way we can become a top contender in this conference is to do those things.”
The coach added he enjoyed coaching the Cadets this season.
“I can honestly say that this season was a blast,” Gossman said. “This group was a great group to work with. My assistant coaches, Cassie Martin and Gena McCaffrey, were excellent to work with and the staff at Crestwood was always supportive.”
Season statistics
Pisney led the Cadets with 337 kills, averaged 3.83 kills per set, completed 223 of 240 serves (93 percent), had 18 aces, tallied 95 digs and had 23 total blocks. Goodman was second on the team in kills with 192, completed eight of 11 serves, had two aces, and led the team with 89 total blocks, including 48 solo blocks.
Brooklyn Ferrie tallied 25 kills, completed 30 of 35 serves, had four aces, 30 digs and 15 blocks. Memphis Sweeney posted 25 kills, 32 digs and had 12 blocks.
Jacey Bina had 20 kills, completed seven of 10 serves and had 28 digs. Amiah DeWolf tallied 18 kills, completed 25 of 29 serves, had one ace and two blocks.
Samantha Balk had 16 kills, nine digs and posted 21 blocks. Danielle Ahern had 12 kills, five digs and five blocks. Taylar Pecinovsky tallied four kills, completed 207 of 217 serves (95 percent), had 11 aces, 201 assists and 61 digs.
Audrey Grinhaug had two kills, completed 87 of 96 serves, two aces and 66 digs. Emma Mannery had two kills, completed 282 of 301 serves, tallied 10 aces, led the team with 324 assists and had 101 digs. Maddie Steffen completed 172 of 184 serves, had 19 aces, and 119 digs.
Kaylee Thomas completed 104 of 114 serves, had eight aces and 80 digs. Kayla Lentz completed 231 of 257 serves, led the team with 22 aces and was first on the team with 291 digs.