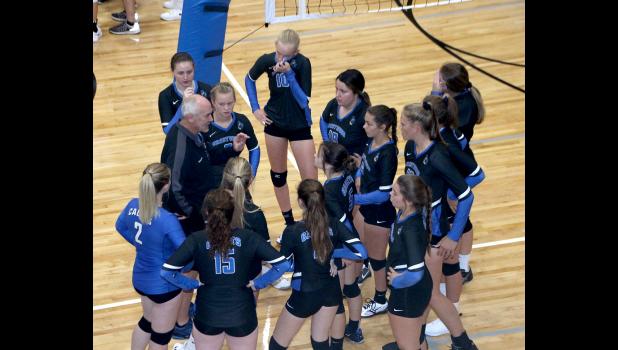 By:
Nate Troy Sports Editor
WAVERLY - The Crestwood volleyball team gave a strong effort against Class 4A No. 5 Waverly-Shell Rock before losing to the Go-Hawks, 1-3 (12-25, 9-25, 25-21, 10-25) on Sept. 4 on the road.
Competing against many strong teams at the Kepros Tournament Saturday at home, the Cadet spikers finished sixth overall with three wins and three losses.
Crestwood beat Clayton Ridge (21-12, 21-18) and Lansing Kee (21-16 and 21-15) in pool play. In the second round, the Cadets topped North Fayette (21-15, 21-10) and lost to Waterloo West (14-21, 19-21). In the fourth to sixth place pool, Crestwood lost to Lisbon (15-21, 19-21) and fell to Clayton Ridge (17-21, 21-18, 12-15). Cadet junior Sharon Goodman was named to the All-Kepros Tournament team.
New Hampton beat Waterloo West 21-15 and 21-11 to win the team title. Other schools at the tourney included: Clayton Ridge, Lansing Kee, Lisbon, North Fayette Valley, Waterloo West, Turkey Valley and Waukon.
Waverly-SR match
Cadet Head Coach Robin Gossman gave kudos to his team for its stout effort against a very good W-SR team.
“We obviously played one of the best teams in the state and came away with a satisfying one game victory (before losing the match),” Gossman said. “After losing the first two sets the girls finally bought into the more aggressive approach. Our serving aggressiveness finally started to work. By serving aggressively, the Go-Hawks were limited to one option offense making it much easier for our blockers to do their job.
“I have to give credit to the girls. After losing the first two games, they could have rolled over and just quit, however they did not. This tells me a lot about their character. Hopefully we can use this experience and build off of it. Honestly, to take a game  from the fifth ranked team in 4A is a milestone,” Gossman said.
Cadet statistics
Sharon Goodman led Crestwood with 10 kills, had three blocks, completed 10 of 11 serves and had two aces. Memphis Sweeney had seven kills. Laken Lienhard tallied 22 assists, three digs, completed 15 of 16 serves and had three aces.
Mikayla Lane had three kills and two blocks. Amiah DeWolf had two kills. Trista Foster completed 14 of 17 serves, had one ace and two digs. Ashley Voves had nine digs and completed eight of eight serves.
Kepros Tournament
Coach Gossman said the Cadets started the tourney well but had trouble late.
“I was very pleased at the way we started out winning our first three matches,” Gossman said. “However, the way we finished was extremely disappointing. The girls kept digging huge holes only to come back close, but were unable to finish at the end of the day. Our blocking still needs work. Our offense needs to speed things up and our serving still needs improvement.”
The Cadets will travel to Clear Lake on Sept. 13, and they will compete at the Waukon Tournament on Sept. 15. The next home match for Crestwood will be on Sept. 18 against Charles City.