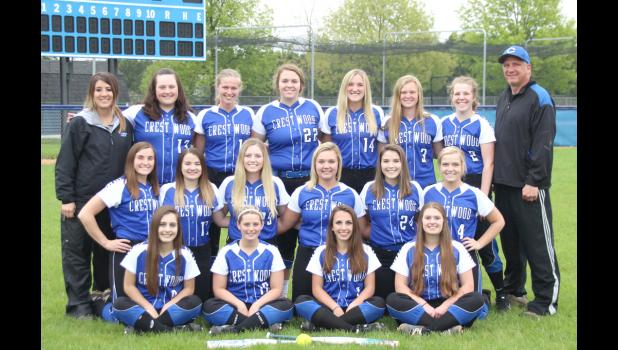 By:
Nate Troy Sports Editor
CRESCO - Although the 2018 Crestwood softball season ended one game short of the Class 3A State Tournament, the Cadets can be proud of what they accomplished this summer.
The Cadets posted a  stellar 24-10 overall record, which included a 14-4 mark and second place in the Northeast Iowa Conference.
This year’s team included five seniors: Shannon Pisney, Taylar Pecinovsky, Madison Steffen, Kaylee Thomas and Kayla Lentz. Pisney was named First Team All-NEIC for the third time during the 2018 season. Pecinovsky and Thomas both earned NEIC Honorable Mention.
Juniors on the squad included: Ashley Voves, Trista Foster, Annie Mast, Kristen Reicks, Hallie Frohn, Kennedy Gaul and Kimberly Hauber.
Sophomores on the team included: Keelee Andera, Laken Lienhard, Shelby Pisney, Kailyn Erickson and Kryslynn Ruppert. Eighth-grader Kyleigh Foster also competed on the varsity this year. The Cadets were led by Head Coach Doug Sickles and Assistant Coach Alicia Denner.
The Cadets opened the season with an 11-0 win over MFL-Mar-Mac before they lost two one-run games to eventual conference champion Charles City. Crestwood swept two games against Decorah at home before splitting a twinbill against New Hampton.
At the Crestwood Tournament, the Cadets crushed Turkey Valley (13-4) and Mason City Newman (6-0) before losing to No. 3 Independence, 1-5, in the championship game.
The Cadets went 3-3 over its next six games before they shut out Decorah (8-0), North Linn (1-0) and Cascade (5-0). Crestwood lost to Dyersville Beckman and Williamsburg at the West Delaware Tournament on June 16.
Crestwood closed the regular season strong with nine straight wins, including doubleheader sweeps of Waverly-SR and Waukon. The Cadets beat Union (5-2) and New Hampton (2-1) in the first two rounds of the regional tourney before they lost to No. 3 Waterloo Columbus, 1-5, in the region final on July 9.
Sickles noted pitching and defense led the Cadets in many games this year.
“The old adage in baseball and softball is that pitching and defense win games and offense tells you how much you win by,” Sickles said. “This year, our two big strengths were our pitching and defense. We won 24 games because of those two aspects.
“One deficit we had this year was our consistency with our hitting. Every player had some big hits at times this year, but we didn’t hit consistently up and down the lineup like we did in other years.
“Before going into the season, we only had four kids who had significant varsity experience. Going from the Junior Varsity to the Varsity is a huge jump for most kids, but overall, we still had a very successful year by going 24-10 and finishing second in the conference,” Sickles said.
Cadets battle hard
The coach noted he was happy to see the Cadets fight hard in every game.
“What impressed me most about this team is that we were in every ball game,” Sickles said. “We never got blown out by anyone.
“Most of the time in softball, you look back at the season and say, ‘We were a lot better than that team, and we should have won that game.’ But this year, we didn’t have those kinds of games. When we were a more dominate team than our opponent, we won that game.
“Another aspect that impressed me was the fact that we swept Waverly-Shell Rock in three games this year. It’s been a long time since we’ve swept them,” Sickles said.
He was also thrilled to see the Cadets win three of four games against New Hampton this season.
“During the second week of the season, we lost the first game of a doubleheader against New Hampton, but we snuck out a win (1-0) in game two. Later in the year, we beat New Hampton two more times. Those takeaways (from the season) were very good for us,” Sickles said.
The coach noted Laken Lienhard and Shannon Pisney both played a big part in the team’s success. Lienhard finished the year with a 22-10 record in the pitching circle, posted a stellar 1.43 earned run average, struck out 239 batters and held opponents to a .147 batting average.
Pisney led the team with 41 hits, including 12 doubles, had 33 runs batted in and was second on the team with a .383 batting average. Lienhard led the team at the plate with a .394 batting average, had a team-high eight home runs and was first in RBI with 34.
“Laken was a dominate pitcher for us,” Sickles said. “With Shannon, not enough can be said in terms of what she has done during her career at Crestwood, not just in softball, but in every sport she has played. In softball, she played three years on the Varsity and she was First Team All-Conference all three years.
“Shannon gave us a stabilizing force up the middle (at shortstop). One of her big memorable moments she had this season was her relay throw to home (against New Hampton in the region tourney) to retire the tying run. That throw characterized her in terms of how she plays in big games,” Sickles said.
The coach noted all five seniors (Shannon Pisney, Pecinovsky, Steffen, Thomas and Lentz) all played well this year.
“All of our seniors showed improvement throughout the season,” Sickles said. “Going forward, we’ll still have several players coming back next year.
“We just need to work on being more consistent on offense, and we need to put more pressure on other teams. We have an indoor batting cage at the junior high we can work out in (during the off-season).
“After the season, we talked to the younger kids and we told them you are what you put into (the sport). If they want to be successful, they need to put the time into it to practice,” Sickles said.
He is excited to have pitcher Laken Lienhard, catchers Kristen Reicks and Kryslynn Ruppert, and several other players coming back for the 2019 season.
“We’ll have a lot of key players coming back who will help us be successful next year,” Sickles said. “We just need to put the (practice) time in to get better. We can’t afford to be stagnant.”