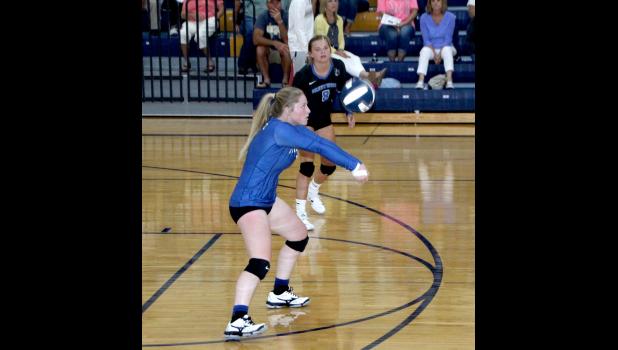 By:
Nate Troy Sports Editor
SUMNER - Facing two stout teams on Aug. 23 in Sumner in the season opener,  the Crestwood varsity volleyball team gave a solid effort in both matches before coming up short.
The Cadets fell to Sumner-Fredericksburg, 21-25, 14-25, 20-25; and they lost to Tripoli 15-25, 21-25, 14-25.
“Even though we lost I was generally satisfied on how we played,” Cadet Head Coach Robin Gossman said. “We are a much, improved team over last year. Our team balance is close to where we need to be. Even though I am satisfied where we are right now we do have work to do. This was our first match, and I have a much better understanding on what we need to work on and what worked.”
Gossman is hopeful the Cadets improve on their defensive play.
“I was not pleased on our defense. I always state that defense starts at the net and without net defense, too much is expected from our back row. I seriously thought going into the year that our net defense would be our strong point. Last night showed otherwise. We will spend a lot of time working on blocking over the next few days,” Gossman said.
The Cadets will compete at Waverly-Shell Rock on Sept. 4 at 7:15 p.m., and they will host the Kepros Tournament on Sept. 8 at 9 a.m.
Sumner-Fred match
Sharon Goodman led the Cadets with nine kills against Sumner-Fredericksburg and had two blocks. Mikayla Lane tallied five kills. Laken Lienhard posted 22 assists, had four digs, completed nine of 10 serves and had one ace.
Ashley Voves completed 14 of 16 serves, had one ace and seven digs. Trista Foster completed seven of seven serves and had four digs. Amiah DeWolf had three kills. Memphis Sweeney posted four kills, had three digs, completed five of six serves and had two aces.
Tripoli match
Ashley Voves connected on 10 of 11 serves, had three aces and six digs against Tripoli. Laken Lienhard posted 22 assists, had two digs and completed five of five serves. Memphis Sweeney had six kills and three digs.
Mikayla Lane tallied six kills. Sharon Goodman had seven kills, two blocks and completed six of nine serves. Trista Foster completed four of five serves and had three digs.