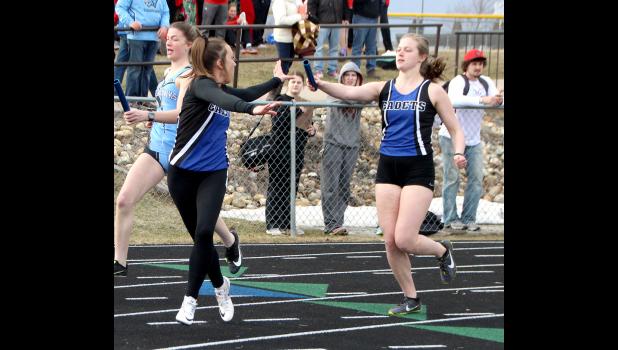 By:
Nate Troy Sports Editor
WEST UNION - The Crestwood girls’ track team opened its outdoor season with a bang on March 28 as the Cadets nabbed first place overall at the North Fayette Valley Meet with 178 points.
Junior Sharon Goodman was one of several Cadets who finished in the top three individually. Goodman grabbed first in the discus with a school-record toss of 130 feet, 8 inches and she won the high jump at 4-6. Katie Saner took gold in the 100 dash (13.02 seconds), nabbed second in the long jump (14-0.5) and was second in the 200 dash (27.45).
Cassidy Ihns won gold in the 1500 in 5:18.38. The 4x400, 4x800 and shuttle hurdle relay teams all captured first.
“This was a good start to the outdoor season,” Cadet Coach Jim Obermann said. “It is always a transition to the outdoor season as the kids get used to the elements and different dimensions of the track. I thought we competed well, and had solid performances, but we have much room to improve.  At this point, we at least have a baseline on which to improve.
“Sharon Goodman got off to an outstanding start as she broke the school record in the discus with a throw of 130 feet, 8 inches,  which qualifies her for the Drake Relays.  The previous record was set by Jessie Stika in 2010 at 128-11. Sharon is poised to have a monster year in the discus.
“Kristen Reicks also threw her season’s best in the shot put (36-2.75), and in general, I was very pleased with our throwers.  They all had a solid meet.
“I was also very proud of Sarah Mashek in the 3000 meters.  She had a strong second place finish.  Sarah is a valuable asset to our team as she is willing to run in a variety of events in whatever way she can to help the team.
“Our shuttle hurdle team ran a solid race in the first shuttle of the year, and our 4x400 squad wrapped up the meet with a very solid performance for a win.
“We had several other first place finishes. Though some of the kids were a little frustrated with some of their times, it was still a good first night outside in a meet. We look for much improvement in the weeks and meets to come,” Obermann said.
Girls’ team standings
1. Crestwood 178 points; 2. North Fayette Valley 115; 3. Denver 97; 4. Tripoli 69; 5. Dunkerton 57; 6. Turkey Valley 50; 7. West Central 38; 8. Postville 9.