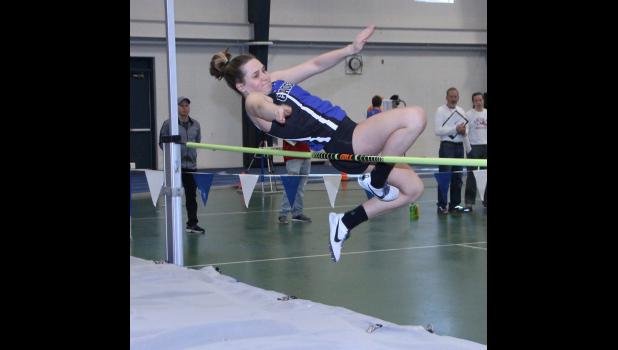 By:
Nate Troy Sports Editor
CRESCO - Battling many solid teams at the Decorah Indoor Invitational on March 16 at Luther College, the Crestwood girls’ track team chalked up several solid performances. No team scores were recorded.
The Cadets finished in the top five in 11 events at the meet, including four first place finishes. Lexi Hoppe won gold in the 55 meter hurdles in 9.46 seconds, and she took first in the long jump at 15 feet, 5 inches.
Cassidy Ihns nabbed gold in the 3000 meters in a time of 10:45.65 seconds. Crestwood’s 4x800 team of Rachel Steffen, Hope Dohlman, Sarah Mashek and Mattie Slavin took first in a time of 10:51.74.
Crestwood grabbed second in the 1600 sprint medley relay (4:35.20), second in the 4x200 relay (1:56.21) and second in the 4x400 relay (4:30.17).
Hope Dohlman was second in the 800 meters in 2:42.31 while Mashek took fourth in 2:51.70. Kristen Reicks was third in the shot put at 35 feet, 11 inches. Katie Saner took fourth in the 55 dash in 7.77. Sharon Goodman was fifth in the high jump at a height of 4-8.
“I was pleased to finally get our entire team on a track,” Cadet Coach Jim Obermann said. “All of our team members had a chance to get in a lot of solid work.  All of our runners were able to be in at least three events, so it was a very positive step forward for the team. We had many girls perform very well.
“I thought our throwers and jumpers had a great day showing much potential to have a strong year. Kristen Reicks and Cameron Olllendick had an excellent meet. Lexi Hoppe and Katie Saner went first and second in the long jump. Lexi Hoppe was also strong in her running events as she also won the 55 Hurdles.
“Probably our greatest strength all day was our middle distance and distance girls.  They have done a great job so far in the pre-season of putting in quality treadmill miles, and they were excited to be on a real track.  This work showed as Cassidy Ihns won the 3000 meters and the 4x800 teams took first and third.
“Hope Dohlman had an excellent day as well as was part of the winning 4x800 team, second place 4x400 team, and placed second in the open 800.  We also had a very strong race in the Distance Medley.
“Overall, our relays were strong and this was against very good competition. This meet was just a beginning and a way to work through some nervousness and establish some base performances to build on.  I was very proud of the girls and their enthusiasm for competition.  If we can keep working hard, get on our track soon, and stay healthy, we can have a fun year,” Obermann said.