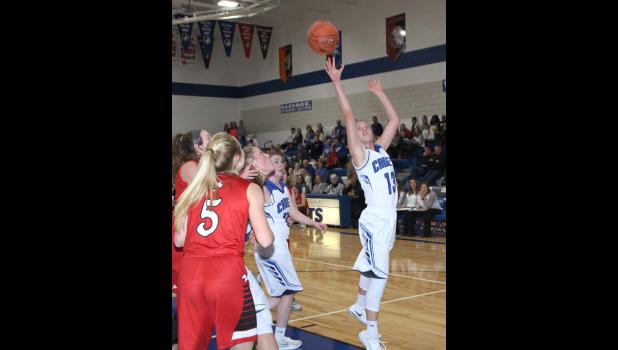 By:
Nate Troy Sports Editor
CRESCO - After a close first half, the Cedar Falls Tigers pulled away from the Crestwood girls’ basketball team on their way to a 64-32 win over the Cadets on Nov. 26 at home.
The loss dropped Crestwood’s overall record to 1-1. It was the first defeat for the Cadets since Feb. 28, 2017 when they lost to Cherokee in the first round of the 2017 State Tournament.
Crestwood took an early 5-0 lead on a three-pointer by Laken Lienhard and a two-pointer by Sharon Goodman. However, the Tigers stormed back to cut the Cadets’ lead to 11-10 late in the period. After Crestwood took a 13-10 lead, Cedar Falls nailed a half-court shot at the buzzer to tie the game at 13-all going in to the second period.
Cedar Falls opened the second period on a 9-0 run to take a 22-13 lead. The Cadets sliced the lead to 22-18 at the 4:30 mark, but the Tigers pushed their advantage to 28-20 at halftime.
The Tigers continued to extend their lead in the third period as they grabbed a 48-26 lead going into the fourth.
“I was pleased with how we started the game,” Cadet Coach Dale Dennler said. “We played good defense early, but Cedar Falls wore us down. Their length (height) bothered us, and we didn’t make good passes at times.
“We told the girls there are some things we can improve upon, and we need to keep growing as a team. It’s good to play a tough team like Cedar Falls. We need to play team basketball and set screens. This was a good learning experience for us,” Dennler said.
Cadet statistics
Sharon Goodman led Crestwood with 14 points. Laken Lienhard had eight points, including two three-pointers. Sam Balk had six points. Annie Mast tallied two points. Brooklyn Ferrie and Mattie Slavin each scored one point.