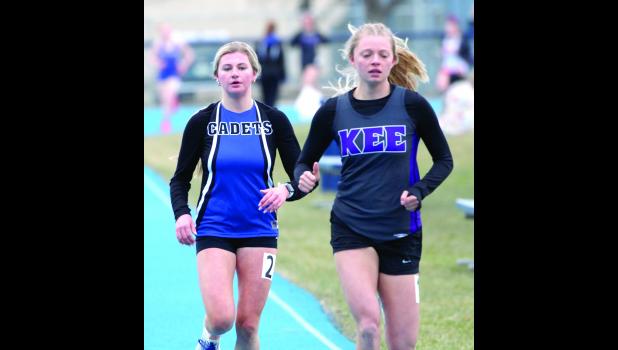 By:
Nate Troy Sports Editor
CRESCO - Facing off against several stout teams at its home meet on April 19, the Crestwood girls’ track team turned in several stout performances on its way to a second place finish with 93 points. Decorah won the team title with 173 points.
Cadet senior Kyleigh Foster won gold in the 800 meters in a time of 2:29.76 seconds. Kinze Shea nabbed second in the 3000 meters in 11:16.24. Olivia Ollendick placed second in the 1500 meters in 5:35.39.
Crestwood’s 4x800 team of Foster, Ollendick, Laney Peter and Kendel Slavin took second in a time of 10:34.92. The 4x200 team of Dylan Rahlf, Olivia Johnson, Tierney Perkins and Cloey Horns placed third in 1:59.58.
Crestwood Girls’ Head Coach Karen Steffen was thrilled with her squad’s effort.
“Shea had a personal best time in the 3000 meters, and she sits at number 10 in the state (in this event),” Steffen said. “Our shuttle hurdle relay team of Ella Bergan, Tara Koshatka, Emily Voyna and Allison Ferrie) ran their first-ever shuttle hurdle relay.  We haven’t had a shuttle hurdle team since the 2019 season. They have been working hard to improve on their form and speed for this event, and it is paying off.  We are super proud of their efforts.
“Foster had a personal best in the 800 meters. She has been training hard to improve her form, sprint speed, and running efficiency.
“Our 4x100 relay team (Dylan Rahlf, Olivia Johnson, Lily Troendle and Aubrey Mannery) ran one of the best times (54.80)  Crestwood has had in a few years.
“Our 4x400 relay team (Shea, Cloey Horns, Tierney Perkins and Brooklyn Burke) has not backed down from the challenges we have given them. Each girl ran a solid time. We also had several top three finishes from our Junior Varsity competitors,” Steffen said.
NFV meet
WEST UNION - Crestwood turned in many strong performances en route to a first place finish at the North Fayette Valley Invitational with 108 points. Sumner-Fredericksburg and Oelwein tied for second place with 85 points.
Steffen was proud to see many Cadet athletes perform well at the NFV Invite.
“Kendel Slavin (second in the 3000 meters) ran her personal best time of 12:04.30, which was a great confidence boost,” the coach said. “Olivia Ollendick (fourth in 1500) posted a personal best time of 5:23.81, which increased her confidence.
“Kaylee Johnson (high jump) cleared 4 feet, 8 inches on her first jump to earn the championship. The 4x800 relay team of Tara Koshatka, Kinze Shea, Laney Peter and Ollendick took first place by more than one minute (11:17.46).
“In the shot put, we doubled up in points as Abby Buls took third (30-10) and Korey Hrdlicka was fifth (30-1.5) with her personal best throw. Foster placed first in the 800 meters in 2:30.05,” Steffen said.