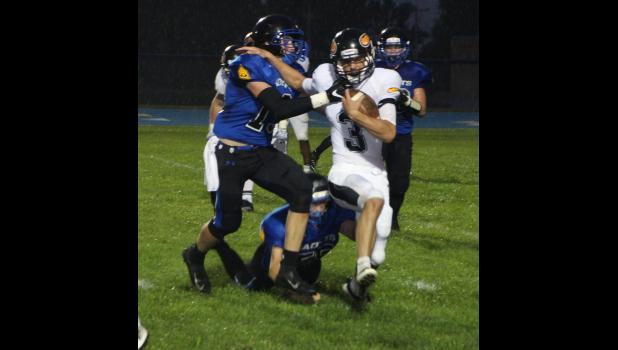 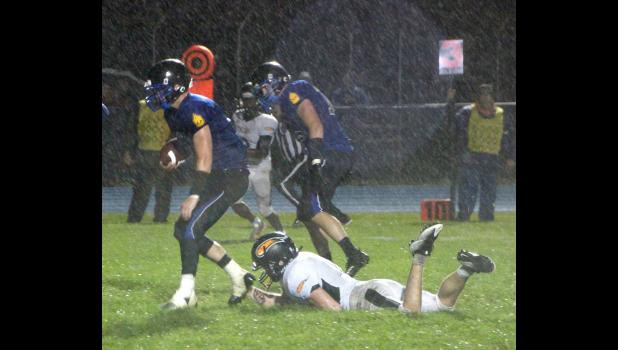 By:
Nate Troy Sports Editor
CRESCO - Neither a driving rainstorm  nor a solid Charles City squad was going to prevent the Crestwood varsity football team from notching a well-deserved 7-6 win over the Comets on Friday, Aug. 24 during their season-opening game.
Following a scoreless first half, the Cadets got on the board first with 7:38 left in the third quarter. Crestwood’s Bryer Thompson recovered a costly Charles City fumble at the Comets’  17-yard line with nine minutes remaining in the third.
After two running plays moved the ball to the 10, Crestwood fumbled the ball into the end zone, but Cadet Zackary Lane alertly jumped on the ball for a touchdown. Harry Kitchen nailed the extra point to give the Cadets a 7-0 lead at the 7:38 mark of the third period.
With 2:30 remaining in the third, Charles City’s quarterback Marcus Cranshaw scored on a 14-yard scamper around left end to cut the Cadets’ lead to 7-6. However, the Comets were unable to tie the score when Crestwood blocked the extra point.
Neither team was able to mount a scoring drive in the fourth quarter. With under 1:30 left in the game, the Cadets were able to convert on fourth down to run out the clock and clinch the win.
Crestwood Head Coach Skip Eckhardt was thrilled to get the win, but he said the Cadets still need to show improvement.
“We had great defense and special teams,” Eckhardt said. “On Charles City’s extra point, we knew that if they stood up (during the play), we were going to go after it, and we got it.
“On offense, we’ve got a lot of young guys playing who haven’t played on the varsity before. Freshmen football is not the same as varsity, but we won the game, so we’re happy. All of our guys did a great job, and they all worked hard,” the coach said.
Crestwood tallied 99 yards rushing on 39 attempts (2.5 yards per carry). Reece Wilson paced the Cadets with 66 yards rushing on 24 carries. Harry Kitchen posted 24 yards on nine carries. Jon Henry had six yards rushing, and Braden Hayes gained three yards.
Jon Henry completed three of seven pass attempts for 30 yards and had two interceptions. Zackary Lane had one catch for 17 yards. Carter Henry recorded one catch of seven yards. Wilson posted one reception for six yards.
On defense, Bryer Thompson tallied 9.5 total tackles, including nine solo stops, had one sack and one fumble recovery. Carter Henry had eight stops. Garret Ollendieck had six tackles. Wyatt Scheidel and Kody Berns each posted 5.5 tackles. Frank Hrdlicka had four tackles. Logan Albert and Colby Frazer each had 3.5 stops.
Harry Kitchen had two kickoffs for 67 yards, and he kicked one extra point. Kade Munkel had three punts for 117 yards.
Gabe Grabau had one kickoff return for 18 yards. Bryer Thompson had one kickoff return for 13 yards.
Charles City gained 109 yards rushing and eight yards passing. Trever Heitz led the Comets with 57 yards rushing on 14 attempts.
The Cadets (1-0) will play at Waukon (0-1) on Friday, Aug. 31 at 7:30 p.m. in a non-district game.