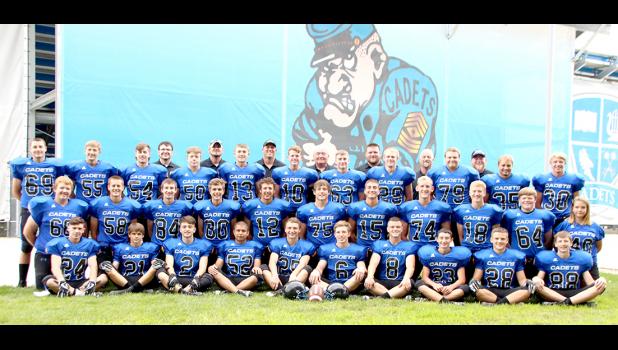 By:
Nate Troy Sports Editor
CRESCO - Even though the 2018 football season didn’t end with a State title for Crestwood, the Cadets still enjoyed a strong season this fall, which saw the team win the district championship, qualify for the playoffs and post a 6-4 overall mark.
This year marked the fourth time in school history the Cadets have won the conference or district title (1976, 1995, 2016, 2018).
The 2018 squad featured 31 total students from grades 10 through 12. The seniors on the team included: Harry Kitchen, FB/LB; Frank Hrdlicka, TE/DL; Jon Henry, QB/DB; Shane Vokaty, WR/DB; Kody Berns, OL/LB; Dalton Scheidel, OL/DL; and Zachary Lane, OL/DL.
Juniors on the team included: Kael Anderlik, HB/DB; Reece Wilson, HB/DB; Logan Albert, WR/DB; Garret Ollendieck, TE/DB; Walker Sobolik, WR/DB; Braden Hayes, FB/LB; Bryer Thompson, WR/LB; Wyatt Scheidel, OL/DL; Eduardo Jimenez, OL/LB; Niklaus Knobloch, OL/DL; Colby Frazer, OL/DL.
Sophomores on the squad included: Carter Henry, QB/LB; Gabe Grabau, WR/DB; Mason Peter, HB/LB; Sawyer Swatek, HB/DB; Lawson Brown, FB/LB; Landon Simiele, OL/DL; Andrew Osmonson, OL/DL; Cameron Sobolik, OL/DL; Justin Kerian, OL/DL; Treyton Burnikel, OL/LB; Reid Wiley, WR/DB; Kade Munkel, WR/DB; Austin Johnson, WR/DB.
Skip Eckhardt, who served as head coach from 1993 to 1995, returned to lead the Cadets as head coach in 2018. Assistant coaches included: Justin Denner, Ryan McCarville, Jason Sorenson, Chris Sullivan, Perry Kessel and Ryan Harrod.
The Cadets opened the season with a thrilling 7-6 non-district win over Charles City at home in the pouring rain.
Crestwood lost to defending Class 2A Champion Waukon, 7-22, on Aug. 31 in a non-district game.
Facing a stout Waverly-Shell Rock team at home on Sept. 7, the Cadets battled hard before losing, 0-7.
Crestwood concluded its non-district portion of its schedule on Sept. 14 with a 6-23 loss to Decorah.
The Cadets opened district play on Sept. 21 with an impressive 47-17 win over Iowa Falls-Alden on the road.
Taking on No. 6 Clear Lake during their homecoming game on Sept. 28, the Cadets upset the Lions, 40-27, to improve to 2-0 in the district.
Playing at New Hampton on Oct. 5, the Cadets won a thrilling 27-21 double overtime contest against the Chickasaws to grab first place in the district at 3-0.
Playing at Hampton-Dumont on Oct. 12, the Cadets clinched the district title with a 41-13 win over the Bulldogs.
Facing Forest City at home on Oct. 19, the Cadets concluded the district season at 5-0 with a 33-13 win.
Taking on Algona in the first round of the playoffs, the Cadets competed hard before losing to the Bulldogs, 20-45.
Eckhardt was pleased with the effort the Cadets gave in every game this season.
“Our guys showed some growth this year,” Eckhardt said. “They were hard-working and physical. They did a good job in believing in the process because when things are new (with a new coach), there are a few changes.
“Our guys continued to get better as the year went on, and we were district champs. I’m also happy we had a lot of guys who earned All-Academic honors,” Eckhardt said.
He was also excited to see the players working hard in the weight room before and during the season.
“Championships are won in the weight room while games are won on the courts, in the fields and on the mats,” Eckhardt said. “Our work in the weight room started in March at 6:20 a.m. We had both girls and boys in the weight room (working out), and we averaged around 70 kids all summer long.
“We continued with the workouts during the season because we want the kids to be strong all year long. Plus, we want to work out to prevent injuries. Our weight room is for all athletes. It’s not just a football weight room. We teach all athletes,” Eckhardt said.
The coach noted that he doesn’t want to see anyone rest on their laurels going into next year.
“We can always improve on our strength, quickness, agility and speed,” Eckhardt said. “Everyone can get better, including myself and all the coaches. If you’re not working to get better, you are wasting your time. Every day it is important to learn something.”