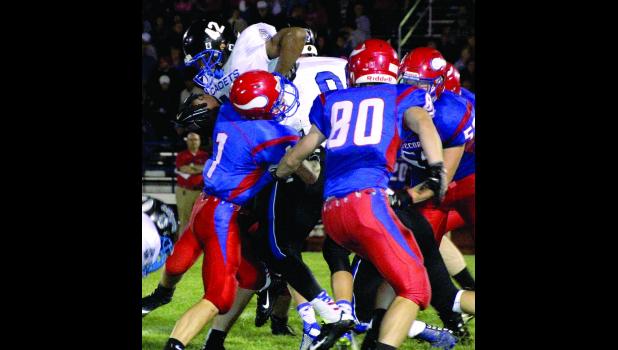 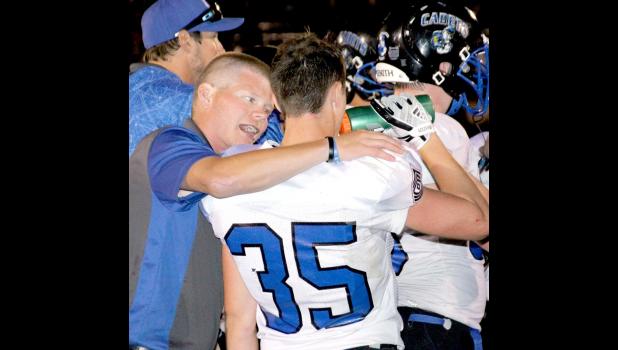 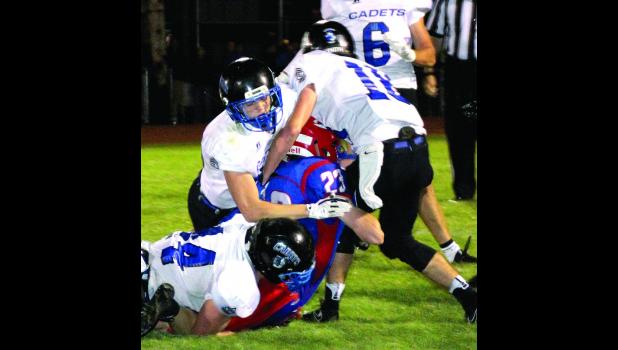 By:
Nate Troy
DECORAH -  Even though Decorah came out on top during Friday’s varsity football game against Crestwood, 14-6, the Cadet gridders proved they have plenty of fight in them.
One week after losing to Waverly-SR by 55 points, the Crestwood Cadets bounced back strong by going toe-to-toe against the Vikings for four quarters before losing to Decorah by eight points. The  Cadets (0-2 overall) will aim to get on the winning track Friday, Sept. 8, at home against Hampton-Dumont (0-2) in the district opener for both teams.
As is the case with most tight games, Friday’s contest went down to the final minute. Decorah led 14-6 with 1:07 left in the fourth when Cadet senior Clayton Ollendieck blocked a 30-yard field goal attempt by Cameron DeLong to give Crestwood the ball at their own 20.
After an incomplete pass, Cadet quarterback Jon Henry connected with Kael Anderlik to the Crestwood 36-yard line with 55 seconds left. Unfortunately, a false start penalty and four straight incomplete passes gave the ball back to Decorah on downs with 36 seconds remaining as the Vikes ran out the clock for the win.
Crestwood Head Coach Chris Lentz said Friday’s game came down to a handful of plays that went in favor of the Vikes.
“On Decorah’s first touchdown, we didn’t make them work too hard for that one,” Lentz said. “But we came back and did some good things. We moved the ball well on offense, and our defense stepped up. We had Decorah guessing a little bit.”
The Vikings got on the scoreboard first with a 36-yard touchdown run by Dawson Holkesvik with 9:12 left in the first. Lucas Sweet hit the extra point to give Decorah a 7-0 lead.
The score remained 7-0 until late in the third period when Jon Henry completed a 29-yard touchdown pass to Clayton Ollendieck with 3:14 remaining to cut the lead to 7-6. The two-point pass from Henry to Ollendieck was no good.
With 8:29 left in the fourth, the Vikes capped a 65-yard drive with a four-yard touchdown run by Kailer McCabe. Sweet hit the kick to make the score 14-6.
“Decorah had a couple big plays, including that touchdown to help them go ahead 14-6,” Lentz said. “All-in-all, I thought our guys played good, solid, team defense. We were flying to the ball on defense, which was a lot better than we did last week against Waverly.
“We got 11 guys going for the ball and playing with emotion. We talked with our guys about that during practices. You have to play the game with emotion and have fun. I don’t care if they (the opponent) might get 10 yards on a play, you’ve got to go hit them and be happy about it,” Lentz said.
The coach said the Cadets gave a strong effort on both sides of the ball.
“Our offense was clicking well at times,” Lentz said. “We gave ourselves some opportunities offensively, and we made some nice catches. There were just a couple plays here and there that hurt us. We just couldn’t get that one lucky break to bust a big play open.
“I thought we had that two-point conversion (following Henry’s touchdown pass in the third), but we couldn’t get it. Clayton still almost made a great catch (for two points). We were planning to go for two points anyway because our guys were doing a good job holding Decorah on defense. I thought if we could go up 8-7, maybe we can hold Decorah on offense and win the game.
“One thing that hurt us was getting behind the sticks (the first down markers). We just can’t do that because it’s tough for us to get back those yards. Decorah was able to pin their ears back and send more defenders than we have blockers,” Lentz said.
Despite the loss, the coach praised the effort of everyone on the team.
“I’m very proud of our guys,” Lentz said. “I love the improvement they showed. Our guys are working hard every day. We need to try to stay healthy. We still have a few bangs, bumps and bruises, and we’ve got to get these guys healthy.
“During practices, we’re going to do a lot of brain work and pad work to get ready to rock and roll for the next game (against Hampton-Dumont on Sept. 8). This game against Decorah will be a good springboard for us.
“Now our guys know what they can do. I told the guys after the game, ‘We know what we can do, and what we can not do. We can’t do what we did (against Waverly on Aug. 25), but we’ve got to do what we did this week against Decorah. In our district, we’re going to be in every game we play. We will play hard for all four quarters, and we’re going to hit you. We just need to keep going hard (on every play) and see where the chips fall,” Lentz said.
Statistics
The Cadets finished with 224 total yards on offense, including 165 yards passing and 59 yards rushing. Decorah tallied 298 total yards, including 223 yards rushing.
Crestwood quarterback Jon Henry completed 10 of 21 pass attempts for 165 yards and one touchdown. Clayton Ollendieck had five receptions for 122 yards and one score. Harry Kitchen had three catches for 24 yards.
Dawson Rasmusson led the Cadets’ rushing attack with 47 yards on 11 carries. Chris Guest had 20 yards on 15 carries, and Jon Henry had negative eight yards on three carries.