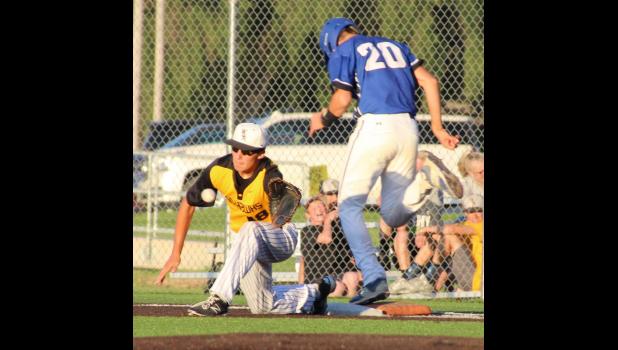 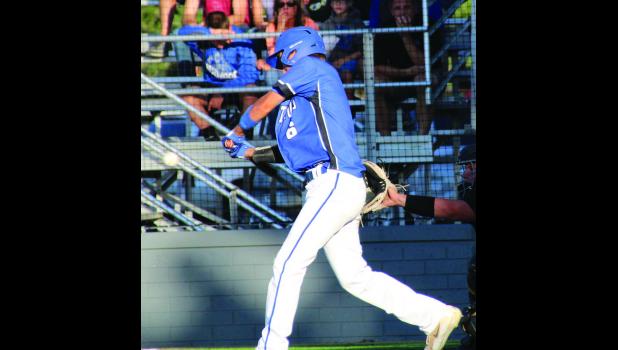 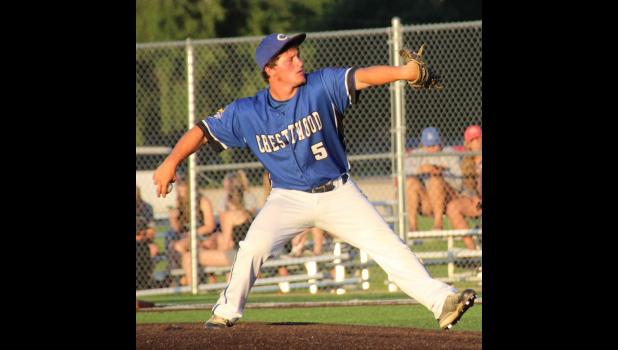 Crestwood boys down Waterloo West, lose to W-SR in districts

By:
Nate Troy
CRESCO - Solid pitching, hitting and fielding helped the Crestwood varsity baseball team notch a 3-1 win over Waterloo West on July 10 at home in the final regular season game.
Playing against Waverly-Shell Rock Friday in the District 5 Substate 3 Semifinal in Waverly, Crestwood stumbled on offense and defense as the Go-Hawks defeated the Cadets, 7-0, to end Crestwood’s season at 11-19 overall. Waverly-SR (25-8) advanced to play Decorah (22-8) in the District Final on July 17.
Cadets 3, Waterloo West 1
Playing at home against Waterloo West July 10, the Cadets chalked up a 3-1 win to conclude the regular season.
West took a 1-0 lead in the second before Crestwood scored three runs in the fourth inning. Ethan Hoppe ripped a single to drive in two runs.
“This was a great night for us, and a great way to end the regular season,” Cadet Coach Gary Steffen said. “Kristian Szajna was very efficient on the mound, and we made some good plays on defense. Ethan Hoppe had a big hit for us to drive in two runs. This was a nice win against a 4A school, and a good way to go into districts.”
Kristian Szajna earned the win. He tossed seven strong innings, allowed only three hits, one unearned run and struck out one.
At the plate, Clayton Ollendieck had two hits, including one double and one run scored. Trae Pecinovsky and Colten Wiley each had one hit. Spencer Cuvelier had one hit and one run. Kristian Szajna had two hits, including one double, and one RBI. Kade Munkel had two stolen bases. Ethan Hoppe had one single and two RBI.
Score by innings
West   0 1 0 0 0 0 0 - 1
CW     0 0 0 3 0 0 x - 3
Waverly-SR 7, Cadets 0
The Waverly-Shell Rock Go-Hawks broke open a close game with four runs in the fourth and cruised to a 7-0 win over the Cadets Friday in the District Semifinal.
Crestwood was unable to take advantage of a scoring chance in the top of the second. Clayton Ollendieck singled and Spencer Cuvelier drew a walk. However, Go-Hawk pitcher Brady Leonard retired the next three batters to escape the jam.
Waverly-SR grabbed a 2-0 lead in the bottom of the second. With one out, Leonard and Kaden Dewey both singled as Leonard moved to third. After a stolen base by Dewey, John Stensland singled to drive in both runners.
The Go-Hawks added one run in the third on a sacrifice fly by Leonard. In the fourth inning, Waverly-SR tacked on four more runs to push the lead to 7-0. Carter Langreck walked to lead off. Trae Pecinovsky came in to pitch for Crestwood. Brady Thompson singled. After a sacrifice bunt by Ryan Willis, Jackson Little drew a walk. Luke Willis followed with a single to drive in two runs. Langreck scored on a wild pitch. Crestwood’s Kristian Szajna came in to pitch. After a walk by Hunter Destival and a single by Leonard, Dewey hit a sacrifice fly to drive in one run.
The Cadets missed a scoring chance in the fifth. Colter Bye had an infield single. Kristian Szajna reached base when Bye was tagged out at third. Szajna was picked off first base. After Austin McAllister reached base on an error, Leonard struck out the next batter to end the inning.
“We had three good practices going into the Waverly game, so I felt good,” Steffen noted. “Clayton Ollendieck struggled a little bit on the mound, and Waverly hit the ball well against him. Trae Pecinovsky came on in relief, and he struggled, too.
“Offensively, we didn’t take advantage of a couple good scoring opportunities. Even though we were ready to play, I think we still need to be more positive overall going into district games.
“I know that our guys want to win, but we need to have the attitude that we expect to win. We need to keep working on the mental aspect of the game. I’m excited for next year because we’ll have a lot of guys coming back, including some younger players who got experience this year,” Coach Steffen said.
At the plate, the Cadets tallied only three hits. Austin McAllister had one single  and drew one walk. Clayton Ollendieck and Colter Bye each had one single. Spencer Cuvelier drew two walks.
Ollendieck was the losing pitcher. He went three innings, allowed five hits, four earned runs, three walks and struck out two.