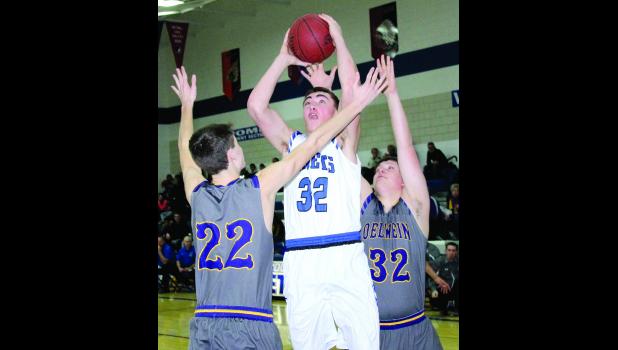 By:
Nate Troy
CRESCO - A nip-and-tuck game against New Hampton last Monday didn’t end favorably for the Crestwood varsity boys’ team as the Cadets fell to the Chickasaws, 67-68.
Taking on Oelwein at home Thursday during Senior Night, the Cadet boys’ team grabbed an 18-7 lead after one period and sailed to a 71-33 romp over the Huskies.
Playing road games Friday and Saturday, the Cadets edged Clear Lake, 80-75, Friday; and they lost to Waterloo West, 52-58, Saturday.
The Cadets (8-11) will begin the Class 3A District 6 Tournament Monday, Feb. 20 at 8 p.m.  against Charles City (14-5) in Charles City. The winner will play either Forest City or Independence Feb. 23 at 7 p.m. in Forest City.
NH 68, Cadets 67
Playing in New Hampton last Monday, the Cadets lost a tight game against the Chickasaws by one point, 67-68.
Crestwood held a 21-19 lead after one period before New Hampton took a 35-32 halftime edge. The Cadets cut the Chickasaws’ lead to 52-51 after three periods, but New Hampton held on for the win.
“This was a close, back-and-forth game throughout,” Cadet Head Coach Lynn McCormick said. “Both teams had their opportunities to win, and New Hampton took advantage of those opportunites late in the game.
“Our free throw shooting (11 for 26) was a factor in the game, and this was a tough loss in the conference. Still, it was nice to have a close game, which will hopefully get us ready for the post-season tournament. We are going to try to finish the regular season strong,” McCormick said.
Nathan Martinek led the Cadets with 24 points, including six three-pointers, had three rebounds and three steals. Clayton Ollendieck had 19 points, three rebounds and one steal.
Spencer Cuvelier had eight points, eight rebounds and three assists. Kristian Szajna had eight points, including two threes, four assists and two steals. Alex Kerian had six points on two three-pointers, four assists and two steals. Jon Henry scored two points and had two assists. Jordan Girolamo had one rebound, one assist and one steal.
The Cadets made 23 of 54 total field goals, including 10 of 25 three-point attempts, and 11 of 26 free throws.
Score by quarters
CW   21   11   19   16  - 67
NH   19   16   17   16  - 68
Cadets 71, Oelwein 33
Facing Oelwein Thursday, the Cadets built a double-digit first half lead en reoute to a 71-33 thrashing of the Huskies.
Crestwood went on an 18-12 run in the second period to take a 36-18 halftime lead before pushing its lead to 58-31 after three periods.
Head Coach Lynn McCormick was pleased with how the Cadets played on both ends of the court.
“We started the game really well, especially on defense,” McCormick said. “We created some turnovers at the start of the game and also at the start of the second half. That led to some easy baskets for us. When we play solid defense, we are a pretty tough team.
“We moved well on offense. We cut the basket well, and we hit a few three-pointers when we needed them, too. Our guys are passing the ball and cutting to the basket well right now. Hopefully, that will be a good sign for us as we head into the post-season tournament,” the coach said.
Alex Kerian led the Cadets with 19 points, including one three-pointer, had four rebounds, four steals and three assists. Nathan Martinek tallied 14 points, including two threes, and had three steals. Clayton Ollendieck had 12 points and four steals. Spencer Cuvelier tallied 10 points, two rebounds, six steals and four assists.
Kristian Szajna had four points, four assists and three steals. Michael Mashek and Zack Lane each scored three points. Jacob Andera and Jon Henry each scored two points. Harry Kitchen and Jordan Girolamo each scored one point. Girolamo also had three rebounds, two assists and two steals.
The Cadets made 26 of 51 total field goals, including four three-pointers, made 15 of 18 free throw attempts, had 19 rebounds, 18 assists and 23 steals.
Score by quarters
Oel    7   12   12   2 - 33
CW  18   18   22  13 - 71
Cadets 80, C. L. 75
Crestwood shot an impressive 79.4 percent from the field Friday to earn an exciting 80-75 win over Clear Lake.
The Lions held a 36-29 halftime lead before the Cadets went on a 28-22 run in the third en route to the victory.
“Our shooting percentage against Clear Lake was amazing,” McCormick said, noting the Cadets made 27 of 34 field goals, including seven threes. “Clear Lake pressed us a lot on defense, and we broke that press to get a lot of layups. We took advantage of our size. Our kids did a great job.”
Spencer Cuvelier led the team with 22 points, had five rebounds, three assists and one block. Clayton Ollendieck had 19 points, including one three-pointer, and four assists. Alex Kerian tallied 14 points, including three threes, had three blocks and three assists.
Kristian Szajna had 11 points, including two threes, five assists and two steals. Nathan Martinek had six points, including one three, and six assists. Jon Henry tallied four points. Michael Mashek and Harry Kitchen each had two points.
Score by quarters
CW   18   11   28   23 - 80
CL    16   20   22   17 - 75
W. West 58, Cadets 52
Playing at Waterloo West Saturday, the Cadets battled hard for four quarters before losing, 52-58.
Waterloo West led 20-9 after one period, 29-21 at halftime and took a 44-31 lead into the fourth.
“We got down by 13 points in the third quarter, but we were able to cut West’s lead to three points in the fourth,” the coach said. “Unfortunately, we had a few turnovers in the fourth which hurt us.
“Although I was disappointed with the loss, I was happy with the effort all of our guys gave. Our kids played well. I’m hoping we will be able to peak (in the post-season),” McCormick said.
Clayton Ollendieck led the Cadets with 19 points, including two threes, had six rebounds, and two steals. Nathan Martinek had 10 points, including two threes, and two steals. Spencer Cuvelier had nine points and seven rebounds.
Kristian Szajna had seven points and 10 assists. Jon Henry scored three points. Jordan Girolamo and Michael Mashek each scored two points. Alex Kerian had six rebounds and two assists.