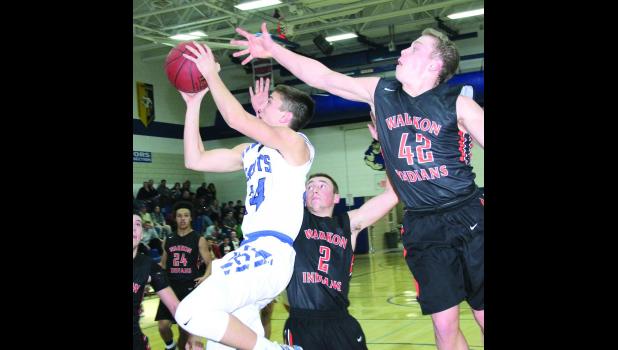 By:
Nate Troy
CRESCO - Following a nip-and-tuck first half, the Crestwood varsity boys’ basketball team opened the third quarter with a 14-5 run and never looked back as the Cadets cruised to a 73-63 win over Waukon Thursday at home.
Playing a non-conference game against Rushford-Peterson Saturday, Crestwood  fell behind early and couldn’t catch up as the Trojans downed the Cadets, 49-33.
Cadets 73, Waukon 63
Thursday’s contest against the Indians was a close game in the first half before the Cadets pulled away late to earn the 73-63 win.
Both teams traded buckets during the first quarter until two late baskets by Nathan Martinek and Clayton Ollendieck gave the Cadets a 23-17 lead heading into the second period.
Crestwood built a 30-21 lead midway through the second quarter, but Waukon came back with an 11-5 run to cut the Cadets’ lead to 35-32 at halftime.
The Cadets got hot on offense early in the third quarter as they reeled off a 14-5 run to push the lead to 49-37 with 4:25 left in the period. Both teams traded buckets the rest of the quarter as Crestwood took a 55-46 lead into the fourth.
In the final period, Waukon cut the Cadets’ lead to 68-60 with 30 seconds left, but Crestwood clinched the game at the charity stripe with two free throws each by Spencer Cuvelier and Nathan Martinek and one by Clayton Ollendieck.
Cadet Head Coach Lynn McCormick said defense was one key to the win.
“We played a little bit better on defense (in the second half),” McCormick said. “We switched to a 1-3-1 trap defense, and our kids did a good job with that.
“Not only did we play better defense, but I thought we rebounded the ball better. When Waukon missed their shots, we rebounded the ball better. We also got the ball where we needed to on offense, and we got some big offensive rebounds.
“Once we got the lead in the second half, we hung on from there. This was a good win. Our kids played well. We still need to shore some things up on defense. It wasn’t a great defensive game, but we played well enough to win,” McCormick said.
He was pleased with the efforts of the non-starters, too.
“Jordan Girolamo, Jon Henry and Nate Martinek did a great job coming off the bench. They really helped us, especially Jordan with the way he rebounded. In the second half, when Waukon missed their shots, we did a better job of rebounding and then we gave ourselves a better opportunity to score on offense,” the coach said.
Clayton Ollendieck led the Cadets with 19 points, had three rebounds and three steals. Nathan Martinek tallied 16 points, including two three-pointers, two rebounds, three assists, and two steals. Alex Kerian had 13 points, including one three-pointer, seven rebounds, three assists and two steals.
Colten Wiley had nine points, including three three-pointers. Spencer Cuvelier had 10 points and nine rebounds. Jordan Girolamo and Jon Henry each scored three points. Girolamo also had nine rebounds, two assists and one block. Kristian Szajna had 10 assists, two steals and two rebounds. Harry Kitchen had one assist and one steal.s
Score by quarters
Wak  17   15   14   17 - 63
CW   23   12   20   18 - 73
R-P 49, Cadets 33
Rushford-Peterson grabbed a 13-2 lead after one period and held the Cadets in check throughout the game as the Trojans won, 49-33.
Crestwood cut R-P’s lead to 22-16 at halftime and trailed by only three points (22-19) early in the third before the Trojans went on a 20-7 run to take a 42-26 lead into the fourth.
Coach Lynn McCormick said the team struggled against R-P’s zone defense.
“When you are playing against a zone defense, you’ve got to be able to make some three-pointers and we didn’t do that,” McCormick said.
“However, I was pleased with our effort and how we played hard. We’re making some progress. Rushford-Peterson played a style of basketball we don’t see that often, which is a patient style on offense that broke us down on defense at times. Also, they hit some three-pointers on us, which hurt us,” McCormick said.
Clayton Ollendieck led Crestwood with nine points, including one three-pointer, and six rebounds. Spencer Cuvelier had six points, 13 rebounds and four assists. Colten Wiley had six points on two three-pointers.
Alex Kerian tallied five points and three rebounds. Jordan Girolamo had four points. Nathan Martinek had one rebound.
Score by quarters
R-P   13   9   20   7 - 49
CW    2   14  10   7 - 33