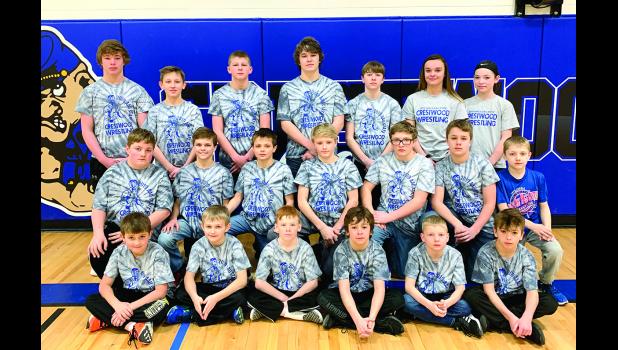 CRESCO - Several local grapplers recently competed well at the Iowa AAU and Iowa AAU Super PeeWee State Wrestling Meet.
Members of the Cresco Youth Wrestling Club who competed at the AAU State Meet included: Keelan Henry, Kaden Courtney, Keaton Henry, Ethan Bergan, Carver Butikofer, Noah Bergan, Blake Kennedy, Mitchell Schmauss, Carter Schmauss, Kole Johnson, Easton Gossman, Brock Voyna, Mitchell Williams, Chase Thomas, Ryan Wilson, Cole Butikofer, Landen Bergan, Cade Korsmo, Emily Voyna and Chyann Bullerman-Yu.
Ryan Wilson is a five-time place winner, including a three-time AAU place winner, a two-time USA place winner as well as a Super Peewee Runner up and he posted a 15-5 record this year. Chase Thomas (9-0) is a one-time AAU champion and a one-time USA champion. Korsmo (10-8) is a one-time AAU place finisher and he placed once in the Super Peewee competition. Butikofer (17-4) is a one-time AAU place finisher.
Chyann Bullerman-Yu and freshman Emily Voyna both competed at the 2019 Iowa AAU Girls’ State Meet held on Feb. 24 at Wells Fargo Arena in Des Moines. Voyna grabbed first place at D118 to become Crestwood’s first female wrestling champion. Bullerman-Yu competed at C91 but didn’t place.
A total of 14 local students competed at the 2019 Iowa AAU State Meet held from Feb. 23-24 at Wells Fargo Arena. The students, their division and how they placed are as follows.
• Mitchell Williams, A66, DNP (Did Not Place)
• Noah Bergan, A66, DNP
• Ethan Bergan, A70, 4th Place
• Mitchell Schmauss, B70, 7th Place
• Carter Schmauss, B78, DNP
• Kole Johnson, B90, 4th Place
• Brock Voyna, B114, DNP
• Easton Gossman, B128, 8th Place
• Blake Kennedy, B160, DNP
• Ryan Wilson, C80, 6th Place
• Cade Korsmo, C85, 7th Place
• Cole Butikofer, C105, 8th Place
• Chase Thomas, C125, 1st Place
• Landen Bergan, C171, DNP
Four students competed at the 2019 Iowa AAU Super Peewee State Participants from March 2-3 at Young Arena in  Waterloo.
• Carver Butikofer, 60#, 4th Place
• Keaton Henry, 54#, 3rd Place
• Keelan Henry, 75#, DNP
• Kaden Courtney, 64#, 7th Place
Kudos for the Cadets
Crestwood’s eighth graders racked up 127 total wins during the 2018-19 season, which included four students earning a medal at the AAU State Tourney. Junior High Coach Hunter Slifka had high praises for these grapplers.
“This is a very unique class,” Slifka said. “This class did a lot of in and out of season wrestling, which translates into results.
“Chase Thomas really led the charge for this group. He was undefeated during the junior high season, completed the year with an AAU State Championship and he was one of the many leaders we had.
“Cole Butikofer, Ryan Wilson and Cade Korsmo also finished the year with hardware (at State). These three ran into some real studs at State, but they battled through adversity to get on the medal stand.
“Landen Bergan got better every day. He battled for a State medal, but he came up one match short of the medal stand. The physical gains he made throughout the season will propel him well into his freshman year.
“Vince Mahr had never wrestled before this season, but he recorded 15 wins and led the team in falls, which shows that hard work translates into results.
“Caden Baca (8-11) was the life of the wrestling room. He brought intensity, determination and a work ethic with him each day.
“Alysa Kennedy and Chyann Bullerman-Yu were the first two girls ever to be on a Crestwood wrestling team. Both girls are wonderful for the sport and they never backed down from a challenge. They both entered the AAU Boys division to try and qualify for a spot at State, however, they were not successful, but they both competed at a high level. They both showed their heart and toughness every day.
“All of the eighth graders contributed to the success of the wrestling program, and all of them have a high level of potential going into high school,” Slifka said.
The coach also praised freshman Emily Voyna.
“Emily had a great AAU State Tournament,” Slifka said. “Being Crestwood’s first Girls’ State Champion, she will play an important role in the future to encourage and recruit fellow teammates.
“What some people might not know is that Emily had to work out multiple times the night of the weigh-in to make weight. She may have won the 118-pound championship, but she weighed in at 112. What she accomplished was an impressive feat."