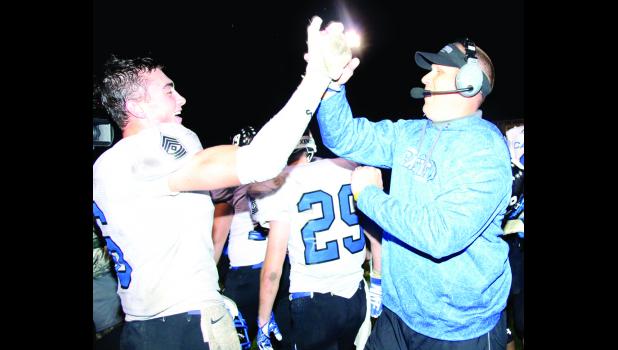 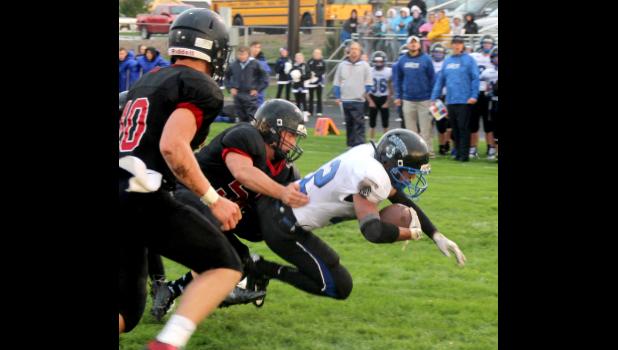 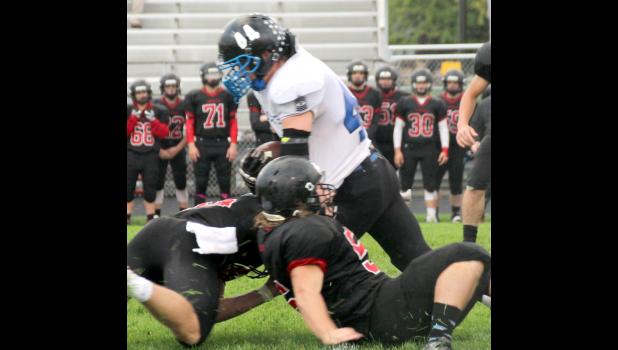 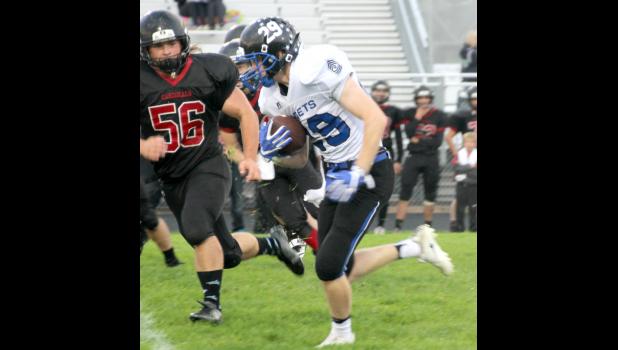 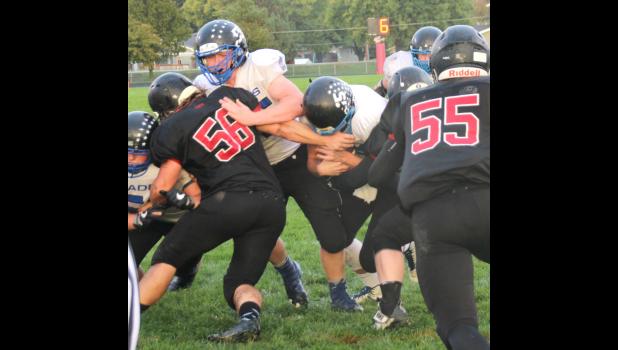 By:
Nate Troy
GARNER -The old saying, ‘It ain’t over till it’s over’ most definitely applied to Friday’s varsity football game between Crestwood and Garner-Hayfield-Ventura.
With 2.4 seconds left on the clock and the ball at the G-H-V 30-yard line, Cadet quarterback Jon Henry dropped back and fired a strike to receiver Clayton Ollendieck in the middle of the end zone as the clock hit all zeros to give the Cadets a heart-pounding 12-9 win over G-H-V.
Friday’s win over the Cardinals not only helped the Cadets stay in a second-place tie with New Hampton in District 2 with a 4-1 mark, it also keeps Crestwood’s hopes for a second straight district title alive.
The Cadets (4-3, 4-1) will host Clear Lake (6-1, 5-0) on Friday, Oct. 13 during Senior Night while New Hampton will host G-H-V. On Friday, Oct. 20, the Cadets will travel to Forest City to conclude the regular season.
Although Crestwood struggled to move the ball at times Friday against the Cards, the Cadets refused to throw in the towel. With only 50.2 seconds left in the game and no timeouts, Crestwood took over the ball at its own 20 after G-H-V missed a field goal attempt.
After a short pass from Henry to Ollendieck, Henry had two incomplete passes before connecting with Ollendieck to the Cadets’ 35. On the next play, Henry hit Harry Kitchen over the middle, who raced down to the G-H-V 25 with 3.5 seconds left. After a false start moved the ball back to the 30, Henry spiked the ball with 2.4 seconds left before hitting Ollendieck with the game-winning pass on the final play.
Ollendieck said he and his teammates did a good job of keeping their composure on the final drive.
“After Garner missed that field goal, I thought, ‘We’ve been in this situation before,’ so we took it slow,” Ollendieck said. “We had no timeouts so we knew we had to get out of bounds.
“We never lost confidence in ourselves. In a game like this, we had a couple turnovers, but there’s no sense in getting mad because when you do, things start to go downhill. We just stayed positive, and we came out on top,” Ollendieck said.
With Friday’s win, the Cadets can still win the district if they beat Clear Lake and Forest City over the next two weeks.
“A win like this is huge,” Ollendieck said. “We’re still in the playoff hunt and we can still be district champs.
“On the last play (of the game), we were in a similar situation last year (against New Hampton),” Ollendieck said. “When we called the play I was hoping Jon (Henry) would throw it to me. When the ball went in the air, I just happened to be at the right spot and the right time. This is my senior year, and it’s all that I could ask for.”
Crestwood Head Coach Chris Lentz noted the Cadets did a good job of moving the ball on their last drive.
“Garner was playing soft on defense (during the final drive) so we were able to dink and dunk (some short passes),” Lentz said. “We didn’t have any timeouts so we got to the sidelines early in the drive, but we knew we were running out of time. Since Garner was giving us the middle of the field, we got the ball to Harry Kitchen and he got us down there (to the 20).
“Then we had the snap infraction (false start), but we were able to clock the ball with two seconds left. We knew we had to get into the end zone, and Clayton did a good job of jumping up to get the ball,” Lentz said.
While he was obviously happy to get the win, Lentz noted the Cadets still need to clean up a few miscues. Crestwood lost two fumbles, tossed one interception and had six penalties for 30 yards.
“We had opportunities (to score) earlier in the game, but we had some mental mistakes,” Lentz said. “We had a couple penalties and got behind the chains, which threw us out of sync. We’re working hard in practice (to eliminate mistakes), but I think during the game, our adreneline is going too hard.
“Our guys want to score, but I think they want to score on every play. They need to understand that not every play is going to go for a touchdown. We need to keep moving the chains (by getting first downs), and we’ll get big plays when we have opportunities,” Lentz said.
Despite a few mistakes, Lentz praised his team for giving their all for four quarters against a solid G-H-V squad.
“We teach our guys to play hard all the time,” Lentz said. “We’re going to go hard from whistle-to-whistle for all four quarters. We tell our guys they are never out of a game until the last whistle blows.
“Our kids give it their all on every play, and they believe they can make the plays, which is half the battle. When you believe you can do almost anything you want, it’s hard to beat that.
“We just need to clean up a few little mistakes and execute our plays better. We need to sustain more drives and punch some more scores in. It would be easier on my heart if we could put a couple more scores on the board, but it’s great to see our kids smiling after a win.
“We got beat a couple weeks ago by one point (against Osage), but it was our turn tonight (to win). That’s football. There are a lot of lessons to learn from a game like this. You never give up, you pull yourself up by your bootstraps and do what you need to do (to win the game),” Lentz said.