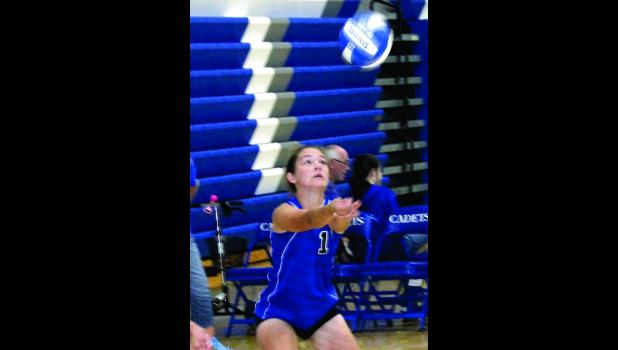 By:
Nate Troy
CRESCO -  The Crestwood ninth grade volleyball team chalked up recent wins over New Hampton and Waverly-Shell Rock at home.
WSR match
Playing against Waverly-SR on Sept. 5, the Cadets  played two solid matches against the Go-Hawks and swept all the games. Scores from the first match were 25-17 and 25-17. In the final match, Crestwood won by scores of 21-11 and 21-3.
“Morgan Moser served eight points in a row and displayed some outstanding defensive skills as libero,” Cadet Coach Gena McCaffrey said. “Mikayla Lane was a standout on the offensive end as she had multiple kills and blocks. I was very happy with the play of the whole  team.
“It has been a long time since we have beaten WSR in volleyball.  I thought our serving led the way for us, as we made them put the ball back into play.  We had several ace serves and forced WSR to make some poor passes, which led to us being able to score points.  If you serve well, good things usually happen,” the coach said.
NH match
Taking on New Hampton at home on Sept. 12, the Cadets split their matches against the Chickasaws.
New Hampton won the first two games by an identical 25-21 score to win the first match.  In the second match, Crestwood came back and won  25-11 and 25-16.
“I was disappointed in splitting the matches,” McCaffrey said. “I felt the team was really capable of sweeping the matches for the night.
"In the first match, we just didn't serve well or communicate on the floor. Our setters, Trystin Thompson, Kaylee Ollendieck and Kaylea Gosnell all have excellent hands for setting and do a good job, when they are vocal and run the offense.  We did a much better job of that in the second match and were rewarded with a win.  We need to consistently communicate.”