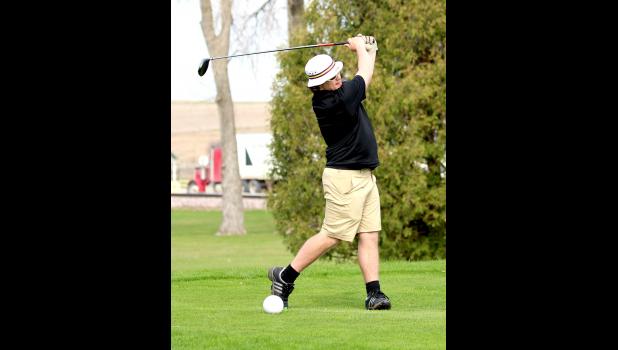 By:
Nate Troy Sports Editor
CHARLES CITY - The Charles City Comets posted three individual scores under 40 to earn a 161-193 dual meet win over the Crestwood boys’ golf team on May 2 in Charles City.
Zane Wemark led the Cadets with a round of 45. Other Crestwood scores included: Landen Bergan 48, Brett Panos 50, Cade Korsmo 50, Kendrik Juelsgaard 56 and Lawson Erickson 57.
Trevor White of Charles City was the medalist with a round of 35. Other Comet scores featured: Jaxon Daniels 39, Carson Gallup 42 and Calvin Hanson 45.
Crestwood Junior Varsity scores included: Ty Cotant 49, Grady Juelsgaard 54, Kalob Kerndt 57, Connor Duryee 63, Nate Dietzenbach 65, Ethan Rice 69, Alex Moser 69, Ben Matthias 69, Randy Fravel 72, Kaden Holten 72, Carter Drees 73, Max Klimesh 76 and Brandon Munkel 79.
“We encountered a wet and warty Charles City course,” Cadet Head Coach Justin Thraillkill said. “Some of the boys found the no-mow areas that appear around most corners of the course, some struggled to roll the ball once on the greens (that were infested with fungus), and some were battling the persisting cold spring temperatures.
“The important thing to note was that everyone played in these conditions.  I hope our guys are starting to understand that they need to be tough in order to reach their goal. We exist in times that get tough and only the tough will prevail.  Zane Wemark proved his grit shooting his competition best (45) to lead the team in Charles City.
“Hopefully, this is a sign of better days leading into the post-season events. Others who considered today to be a bad day on the course still put together a score that slopes the season average towards their goal.
“We played everyone who was healthy to play.  I was thankful for the Charles City coaches for allowing this opportunity to get all of our guys out and competing.  Their experience in the event will greatly impact their nerves for their future in golf.  I am proud of the direction the team is going,” the coach said.
Waterloo meet
WATERLOO - The Crestwood boys’ golf team posted an impressive score of 171 to grab first place in a triangular on May 5 in Waterloo.
Waterloo Christian took second at 183 and GMG placed third at 191.
Crestwood’s Landen Bergan earned medalist honors with a round of 39. Other Cadet scores included: Cade Korsmo 40, Lawson Erickson 45, Brett Panos 47, Zane Wemark 48 and Keagan Wemark 52.
“The boys were motivated to do something special on the course,” Cadet Coach Justin Thrailkill said. “Overall, they did pull off something special.  Our score of 171 was 11 strokes better than our season’s best.
“Landen Bergan and Cade Korsmo put up their personal best scores.  We continue to focus on beating our team competitive scoring average.  When we can achieve that, we consider ourselves successful,” the coach said.
Cadets down TV
JACKSON JCT - The Cadets took advantage of great weather on May 6 to chalk up a 173-182 dual meet win over Turkey Valley at Jackson Heights Golf Course.
Bergan posted a stellar round of 38 to grab medalist honors. Other Crestwood scores included: Brett Panos 42, Cade Korsmo 45, Ty Cotant 48, Grady Juelsgaard 51 and Lawson Erickson 52.