Skip to main content
Home / Sports / After 48 years on the sidelines, Coach Natvig hangs up the whistle 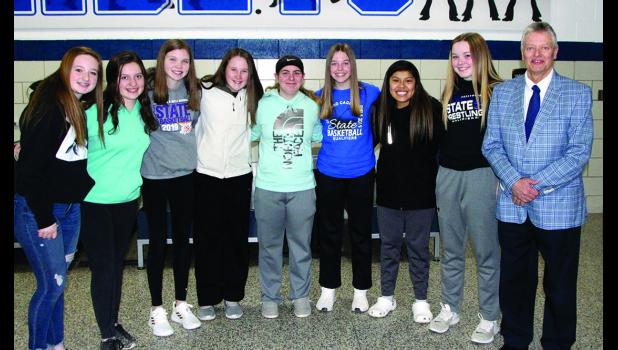 After 48 years on the sidelines, Coach Natvig hangs up the whistle

By:
Nate Troy Sports Editor
CRESCO - For almost half of a century, when Crestwood sports fans looked to the sidelines during a game, there was one person they knew would always be there - Oakleigh Natvig.
Next year those sidelines will look different because he won’t be there. At the conclusion of the 2019-20 basketball season, Natvig announced his retirement from coaching.
To say the least, Natvig has been a mainstay at Crestwood for over 50 years. He graduated from Crestwood in 1967 and then attended the University of Northern Iowa, where he majored in physical education and minored in history before graduating in Jan. 1972.
In the fall of 1972, he moved to Maquoketa where he put the coach’s whistle around his neck for the first time. In addition to substitute teaching at Maquoketa High School, he served as a volunteer basketball and football coach for the junior high and high school squads.
In the spring of 1973, Natvig was looking through the help wanted ads in the Des Moines Register when he saw an ad for a junior high coaching and teaching job at Crestwood. He got the job and moved back to Cresco where he continued his teaching and coaching career. From 1973 to 1983, he taught junior high geography and American History. He also coached seventh and eighth grade football and basketball, and ninth grade boys’ basketball until 1980 when he began coaching the sophomore boys’ basketball team at Crestwood.
During the fall of 1983, he started teaching history at Crestwood High School while also continuing to coach junior high football and the sophomore boys’ basketball team for several more years. From 1997 to 2002, he was the head varsity boys’ basketball coach at Crestwood.
In the spring of 2005, Natvig took a short break from teaching and coaching to take a job in the financial planning field for two years.
“I had been thinking about taking a different job for a few years before leaving Crestwood in 2005,” Natvig said. “However, I realized that my new job was not a good fit for me. Plus, I also missed teaching and coaching so I decided to go back.”
During the 2007-08 school year, he took a full-time teaching job at New Hampton High School. He also went back to the sidelines as an assistant sophomore football coach and a junior high boys’ basketball coach for one year.
During the 2008-09 school year, Natvig was back at Crestwood High School teaching biology and physical education as well as coaching junior high football and basketball. After his job was cut that spring, he took a job teaching and working as the athletic director at Waukon High School during the 2009-10 school year.
Fortunately for Cadet fans, he returned to Crestwood two years later to teach and coach junior high basketball and football. He also taught Drivers Education at NICC at the Cresco and Calmar campus for many years.
“Teaching Drivers Education was enjoyable for me because it gave me a chance to meet kids from other schools as well as Crestwood,” Natvig said. “On some occasions, I had a chance to coach against some of the kids that I taught.”
From 2011 to 2020, in addition to teaching, he also coached the Crestwood ninth grade girls’ basketball team.
While basketball and football were two sports he coached for several years, he also served as an assistant coach for the girls’ track team, the softball team and the eighth, ninth and tenth grade baseball teams at Crestwood for many years.
Natvig was thrilled that he was given the chance to serve Crestwood as a teacher and coach for many years.
“I’ve always loved sports and teaching,” Natvig said. “I like being around kids and teaching them the game. My goal has always been to help kids get better at whatever sport they are competing in. I’ve always stressed fundamentals (in sports) as well as competing and showing sportsmanship.”
While Natvig enjoyed every year he coached, he admitted there were a few challenges.
“When you are coaching, you spend a lot of time away from your family,” he said. “There were also some times when practice time for sports was limited because of the availability of the facilities. Finding the time and a place to practice was challenging at times.”
Despite some of the setbacks, Natvig is leaving the sidelines with an abundance of great memories.
“The parents and the kids that I’ve worked with over the years have been great,” Natvig said. “There have been so many great coaches that I have worked with including: Dale Dennler, Doug Sickles, Jim Obermann, Jason Sorenson, Tom Schmauss and so many others. They have all been very helpful to me. The Crestwood administration, the secretaries and custodians have also helped me a lot.
“During my years as a student at Crestwood, there were so many coaches who assisted me in the classroom and in sports including: Dennis Brosdahl, Ed Squires, Frank Lorenzo and John Holderfer. They were demanding but in a good way. They taught me many life lessons and brought out the best in me,” Natvig said.