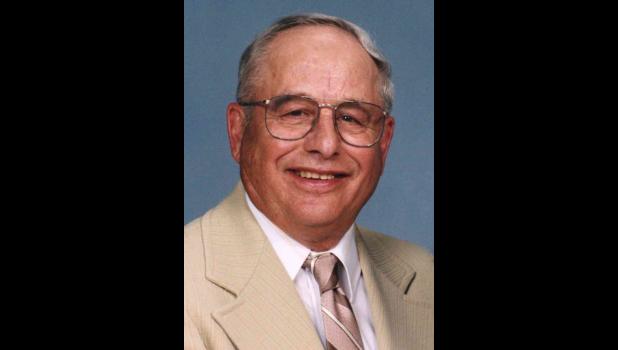 Dec. 19, 1922 —
Aug. 22, 2018
New Hampton - Wallace “Wally” Ernst, age 95, of New Hampton, Iowa passed away on Wednesday, Aug. 22, 2018 at Covenant Hospital in Waterloo, Iowa with his family by his side.
Funeral services will be held at 10:30 a.m. on Wednesday, Aug. 29, 2018 at Trinity Lutheran Church with Pastor Kevin Frey officiating. Burial will be at New Oregon Cemetery in Cresco, Iowa following lunch.
Visitation will be from 4-7 p.m. on Tuesday, Aug. 28, 2018 at Trinity Lutheran Church and will continue at the church one hour prior to the funeral service on Wednesday. Memorials may be directed to the family. Online condolences for Wallace’s family may be left at www.conway-markhamfh.com of New Hampton.
Wallace “Wally” and his dear twin brother, Wayne were born on Dec. 19, 1922 to Charles and Helena (Bergmann) Ernst in rural Winneshiek County. He was baptized, confirmed and educated in Howard and Winneshiek Counties. On Dec. 10, 1944, he was united in marriage to Darlene Olson at the Little Brown Church in Nashua, Iowa. After their marriage, the couple farmed together for eight years before he began his career at Rath Packing in Waterloo, Iowa. The couple then moved to Washburn, Iowa and lived there from 1953-1967. In 1967, They made their home in New Hampton and lived there since. He retired in 1984 from Rath Packing.
Wally was a man filled with faith, hope and love — an eternal optimist. He loved nature and taught his family to care for animals and the land — a love he passed on to his children and grandchildren. He taught his children an outward focus on others to be kind and content. “True wealth is not in the multiplicity of our possessions but in the fewness of our wants.” He taught his family that life’s comebacks can be stronger than life’s setbacks. He was a great listener, counselor and true friend.
Wally always had a big smile and patience to teach the important things in life — like cribbage to his children and grandchildren. His children would say, “We learned to be truthful and always speak well of others. He taught us to strive for lives well lived, to not be a follower of others, but to make our own paths and to always forgive and never go to bed angry. We learned with faith, we become fully prepared to live and through that faith we become fully prepared to die.”
On Dec. 10 of this year, Wally and Darlene would have been married for 74 years! They loved to dance. In fact, that’s how they met and continued to dance joyfully through life. One of their favorite songs was Ann Murray’s “Could I Have This Dance?” Besides dancing, the couple planted an incredible garden. Wally wasn’t only a planter of many plants, but a planter of great loving things in all of his family’s hearts. Wally and Darlene enjoyed gardening and were well-known for their beautiful roses and tulips. They cherished time spent with family and friends and visiting shut-ins. Ushering, serving communion and being readers were some of the ways they were involved in their church.
Wally will be deeply missed by his wife of almost 74 years, Darlene Ernst of New Hampton; his children, Carole (Terry) Andreessen of Libby, Mont., Diane (Craig) LaRue of Denver, Iowa, Patricia (Robert) Jenkins of Waterloo, Shari (Dale) Nosbisch of Ionia, Iowa and Wallace Jeffery (Cindy) Ernst of Cresco; 14 grandchildren, Angelia Kelly, Michelle Vincent, Ryan Andreessen, Lisa Sage, Scott LaRue, Melanie Mastin, Andrew Jenkins-Antonuccio, Michael Jenkins, Kristin Stanford, Elizabeth Zando, Kirk Nosbisch, Sam Nosbisch, Jacquelyn Ernst and Emily Ernst; 24 great-grandchildren; three step great-grandchildren; one sister, Jeanette (Norman) Anderson; one sister-in-law, Elaine Ernst; and numerous nieces and nephews.
He was preceded in death by his parents; his brothers, Arnold, Ervin, Hubert, Wayne and Donald; one sister, Shirley; a sister and brother in infancy; and four sisters-in-law.