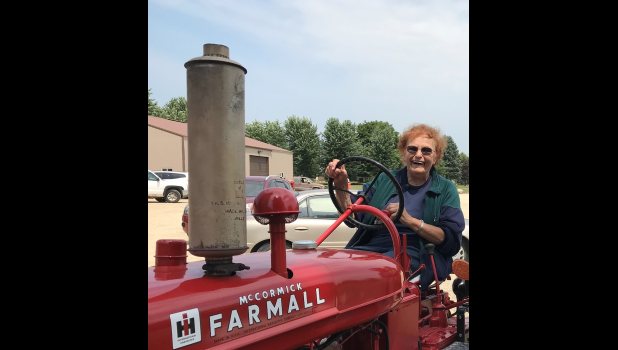 Feb. 7, 1942 —
March 9, 2022
RICEVILLE - Sharon Eastman, age 80, of Riceville Iowa, died on March 9, 2022 after a brief stay at Riceville Family Care & Therapy Center.
There will be private family services at a later date.
Sharon was born on Feb. 7, 1942 in Howard County, Iowa, the second of three children born to Elmer L. and Olive M. Peterson. She attended country school, where she made lifelong friendships. During high school, she played “Glinda the Good Witch of the North” in the school production of The Wizard of Oz. She was on the homecoming court her senior year and worked in the high school superintendent’s office. Sharon graduated from Riceville High School in May 1960.
She married Jim Eastman on June 18, 1960 at the Little Brown Church in Nashua, Iowa. She gained a large extended family with the marriage and always enjoyed spending time with her sisters-in-law visiting, having coffee, listening to stories and laughing. These ladies enjoyed many happy times together, always remaining family.
The couple lived north of Riceville with Jim’s parents for 10 years before moving to their farm east of Riceville in 1972. Sharon remained there until May 2013, when she moved to Riceville. She helped farm, maintaining or improving the homestead at every opportunity. She also worked in the Eastman Auction business for several years.
Sharon provided for her family by raising chickens and growing a large garden every summer. She canned during the hot summer, so meals could be had in the winter. February birthdays always included berries with ice cream because of her work and planning.
Sharon enjoyed sewing. She made, modified and fixed clothing for her family and others throughout her life. She would also sew useful items by creating her own patterns to meet a specific need.
She was a lifelong caregiver. She cared for her mother-in-law and her own mother during their aging process. She also provided care for Jim in his later years. In 1996, Sharon began working at the Riceville Nursing Home and later worked for Howard County Home Health Services. She enjoyed her work and the friendships she made.
Sharon loved all the dogs the family had during the years. Her dogs, Ellie, Stubbs and Bubba, were particularly special to her, keeping her company during her last years.
She thought of her family first and foremost, often choosing to live simply so she could give to them.
Left to remember Sharon with love and laughter are children, Dean (Connie) Eastman, Deb Eastman and JoAnn (Wayne) Eastman; grandson Lyle (JoLynn) Eastman and their children,, Kallie, Klaire and Karter Eastman; grandson, Ryan (Karli) Eastman; and her brother, Larry (friend Vivian) Peterson.
She was preceded in death by her husband of 37 years, Jim in 1998; her parents, Elmer Peterson and Olive Owens; her sister, Beverly (in childhood); Jim’s 10 siblings and their spouses; and numerous nieces and nephews. Sharon was the last of that generation of Eastmans.