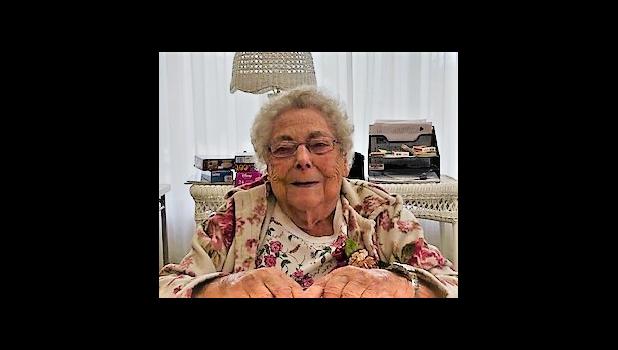 June 18, 1920 —
Jan. 14, 2020
LIME SPRINGS - Ruby Stevenson passed away on Jan. 14, 2020 at St Marys Hospital in Rochester, Minn.
Visitation will be on Tuesday, Jan. 21 from 9:30-11 a.m. with services at 11 a.m. at United Methodist Church in Lime Springs, Iowa.
Ruby Kathryn was born on June 18, 1920 in Lime Springs to Harry and Rose (Dvorak) Hunter. She had four brothers, Clarence, James, Leonard and Harland, and three sisters, Nellie, Clara and Anna.
Ruby graduated from Lime Springs High School in 1938. There, she enjoyed playing basketball and being in plays, as well as being vice-president of her class. Growing up, she and her siblings spent about every Friday night going to the movie theatre for the 25¢ movie or sitting around their mother and listening to her read to them.
On April 27, 1941, Ruby married Raymond Stevenson at Maple Leaf Lutheran Church. They farmed near Riceville for over 25 years. To this union, five children were born, Harry, Thomas, Bernard, Kathryn and Janet. Ruby worked very hard on the farm, as a homemaker and especially as a mother, always putting her children first. They and her grandchildren were her pride and joy.
After retiring in 1967, the couple moved to Lime Springs. Ruby was an active member of the United Methodist Church and singing in their choir. She enjoyed her card games, Bible studies and outings with friends. She was active in the American Legion Auxiliary and enjoyed being a tour guide at Lidtke Mill.
Later in life, Ruby moved to Cresco to be closer to her family. She loved watching her grandchildren perform in their activities. She was an avid basketball watcher, enjoyed reading, doing crossword puzzles and word searches and especially loved playing Farkel with her family.
In 2017, Ruby moved to Evans Nursing Home, where she remained until her death.
She is survived by her two sons, Harry and Tom (Phyllis); her two daughters, Kathy (Robert) Harkrader and Janet (John) Foster; 13 grandchildren; 28 great-grandchildren; and six great-great-grandchildren.
Ruby was preceded in death by her husband, Raymond; son, Bernie; daughter-in-law, Toni Stevenson; her parents; and her siblings.
In memory of Ruby, donations may be made to the Heart or Kidney/Dialysis Association at Mayo Clinic.