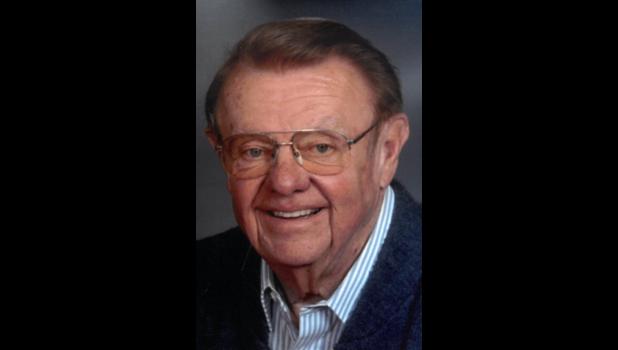 July 5, 1929 —
Nov. 6, 2018
Chester - Richard “Dick” Cray, age 89, of Chester, Iowa passed away on Nov. 6, 2018 after spending three months at Colonial Manor in Elma, Iowa.
The funeral was held on Saturday, Nov. 10, 2018 at Chester Community Center, with Pastor Dan Christensen officiating. Burial was in Chester Hill Cemetery in rural Chester.
Richard Reed Cray was born on July 5, 1929 at his parents’ home in Chester. He was the only son of Winfield and Kathleen (Reed) Cray.  He graduated from Chester (Iowa) High School in 1947 and spent the next two-and-a-half years attending Upper Iowa University and the University of Iowa.
On Jan. 3, 1951, Richard joined the U.S. Navy, spending boot camp in Waukegan, Ill. He was then transferred to the U.S. Naval Amphibious Base in Little Creek, Va. There, he was a PN3 and worked in the personnel office for three-and-a-half years. He spent six months on the U.S.N.S Marine Corp at sea and then traveled to Thule, Greenland.
Richard was united in marriage to Lorraine V. (Prestegard) Cray on June 16, 1951. They had three children, Thomas, Randall and Carla. The couple resided in Norfolk, Va. until he retired, after serving four years. They then purchased a grocery store business in River Falls, Wis. for two years.
Richard returned to Chester in 1956 and joined his father’s insurance and real estate agency. He worked there until he retired in 1993, after 37 years. He and Lorraine then purchased a winter home in Mesa, Ariz. and enjoyed their winters there. Richard loved to work in his yard and flower gardens in his free time. He also had a belief that he just might be the best croquet player in the Chester area.
Richard is survived by his wife, Lorraine of Chester; children, Thomas (Sheryl) Cray of Chester, Randall (Jan) Cray of Lime Springs, Iowa and Carla Cray of Chester; six  grandchildren, Matthew Cray, Jacob (Brooke) Cray, Jessica (Landon) Nordby, Caleb Cray, Andrea (Ben) Steffen and Sydney Cray; and nine great-grandchildren, Calvin, Colton, Isaac, Jazlyn, Braylon, Roan, Evelyn, Elliott and Win.
He was preceded in death by his parents, Winfield and Kathleen Cray; his sisters, Winnifred Ullom and Kay Reed; brothers-in-law, Percy Ullom, Dallas Reed and Robert Maurer; and sister-in-law, Betty Maurer.
Condolences may be left at www.Hindtfuneralhomes. com.