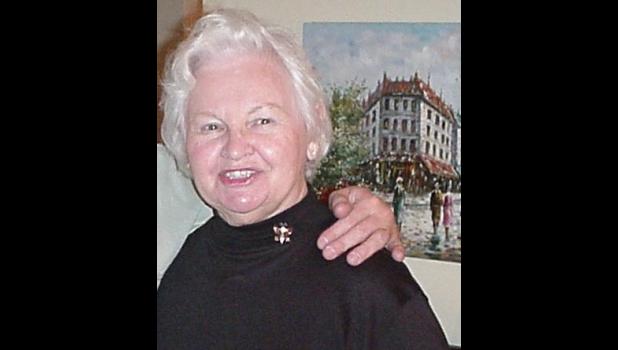 March 15, 1924 —
March 27, 2022
FORMERLY OF CRESCO - Norma Geraldine Haueter (Kratz), beloved mother, grandmother, sister, aunt and friend passed away on Sunday, March 27, 2022 in Orcutt Calif., a mere 12 days past her 98th birthday.
Norma was born in Cresco, Iowa on March 15, 1924, the daughter of Wesley Paul Kratz and Olive Gevena Kratz (Natvig). Norma’s siblings included brothers, Arnold, Merlin, Kassel and Harvey, and sister, Eleanore. Norma spent her childhood on a farm in rural Cresco.
Norma came out to California with a friend back in the early 1940s. A short trip with friend, turned into a lifetime in California. Norma started working for MGM studios back in the early 1940s. She spent 10 years working for MGM studios, where she met many movie stars. In the early 1950s, Norma met her future husband Robert (Bob) Haueter at a local dance club. They were married shortly after and had two sons, Steve and Brian. Norma and Bob raised their two boys in Woodland Hills, California. Norma worked tirelessly as a fulltime mother to her two sons, always schlepping her two boys around to school events, sporting practices and games and an occasional trip to the beach.
Norma’s marriage dissolved in 1974. That year, she reentered the work force. Norma worked in a variety of different industries, banking with First Interstate Bancorp, retail with Zales jewelry and hospitality at the Sportsman Lodge in Studio City.
In 1975, Norma moved to Calabasas, where she lived for 20-plus years. Then in 1998 Norma moved to Thousand Oaks to be closer to her grandkids. She lived in Thousand Oaks for 24 years. Last year Norma was moved to Orcutt, to be closer to her son, Steve and wife, Peggy.
Norma was very close to her brother Merlin and his wife, Joanne. Norma always looked forward to their weekly chats on the phone. Norma’s best friends in Woodland Hills were the likeable Marge May and Beth. Both have long since passed. Norma loved working in her garden, planting flowers, and vegetables and composting long before it was fashionable. Norma’s passion with a healthy lifestyle directly led to her long life. Norma was feeding her family fish and vegetables long before it became a mainstream way of life. This healthy life style was one of the reasons she lived a very long, very healthy life.
Norma is survived by her sons, Steve and his wife, Peggy, and Brian and his wife, Carolyn; Norma’s three grandchildren, Meara and husband, Wade, Keegan and wife, Erika and Rory; and her four Great-grandchildren, Elora, Brena, Marin and Coen.
A private family service will be held in Thousand Oaks at a later date. While Norma absolutely loved white flowers, a donation can be made in lieu of flowers to Norma’s favorite charity the Wounded Warrior Project®, a charity supporting our nation’s most severely wounded veterans. https://support.woundedwarriorproject.org/donate