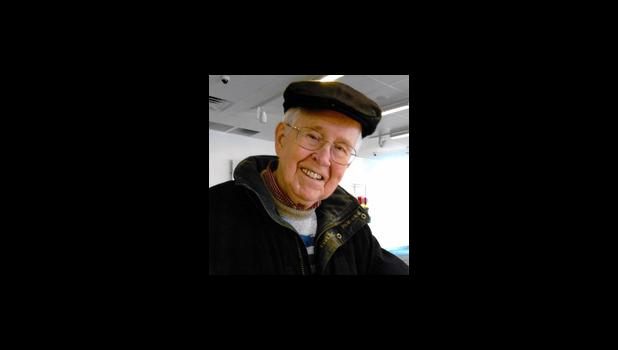 March 27, 1928 —
May 2, 2022
DECORAH - Merlin “Dean” Hagen, age 94, of Decorah, Iowa, passed away on Monday, May 2, 2022, at Winneshiek Medical Center in Decorah.
Funeral services will be held at 11 a.m. on Tuesday, May 10, 2022, at the Decorah Lutheran Church, with Pastor Peter Kowitz officiating.  Burial with Military Honors will be at Oak Lawn Cemetery in Cresco, Iowa, at 2:30 p.m.
Visitation will be from 9 a.m. until the time of service at the church on Tuesday.
Dean was born to Adolph and Myrtle Luella (Moe) Hagen on March 27, 1928, on his grandmother’s farm near Calmar, Iowa, the oldest of two children. He was baptized at Calmar Lutheran Church and confirmed at Glenwood Lutheran Church.
He attended a one-room schoolhouse in rural Decorah and graduated from Decorah High School with the Class of 1945. He graduated with a degree in Business Administration from Luther College in 1949.
After meeting LaRue at her cousin’s skating rink in Decorah, they hit it off and fell in love while double dating alongside Wayne and Arylis Soeder—the four of them always sought out the latest entertainment in the area: dancing, bowling, skating, big band music and Luther League activities.
Dean and LaRue got married on Sept. 20, 1952, and settled in Decorah, where Dean started farming with his father.
In 1954 he served his country as an Intelligence Officer in the Fifth Army for two years out of Mankato, Minn., and sometimes Eeastern South Dakota. He was recently honored with a Quilt of Valor for his service to our country. Dean was discharged from military service in 1956 and moved to Chicago, where he earned an accounting degree from Northwestern University.
The family moved to Cresco in 1957, where Dean helped establish an accounting firm that later branched out to Decorah and Waukon. He was a strong supporter of local businesses and was invited to join multiple local community boards and councils, such as the Howard-Winneshiek School Board, Evans Memorial Home and Aase Haugen Senior Services.
As a father, husband and grandfather, Dean was always motivated by what was best for his family. They were his constant priority. Whether it was a family weekend, cheering on his children and grandchildren at sporting events or attending their musical performances, he was there, even during their Chicago years. The main reason they moved to Cresco was to raise their children around their families in the area—especially LaRue’s siblings, Gloria and Keith. The three families forged lifelong bonds in constant support of one another and braided their families together with any opportunity presented.
Besides his family, Dean had a passion for sports and music. From a young age, he was involved in baseball and softball; he was a center fielder in community softball, voted to play in all-star games every year and played slow-pitch softball in the church league. He was an avid fan of high school and college sports, particularly wrestling, softball, baseball and football.
Dean was a talented tenor: singing for his home church choirs in Cresco and Decorah, and the Luren Singing Society, which traveled to Norway on several occasions. He enjoyed listening to Big Band and Country music and watching Lawrence Welk on Saturday night.
His faith moved him to get involved in his church communities, First Lutheran in Cresco and Decorah Lutheran. He was actively involved in their church councils, choirs and as a Sunday school teacher. He will be remembered for his faith in God, love for family, community involvement and service to others.
Dean is survived by his children, Rick (Sandy) Hagen of Cresco, Georgiann Hagen of Marion, Iowa and David (Jussara) Hagen of Cedar Rapids, Iowa; son-in-law, Wes Brinkmann of Cresco; 10 grandchildren, Nora (Dave) Harer of Mantorville, Minn., Jonathan Brinkmann of Monterey, Calif., Jarred Brinkmann (Veronica) of Northampton, Mass., Jacob (Rand) Hagen of Newbury, Mass., Ryan (Kelsey) Hagen of Cresco and Natalia, Asle, Carl and Kjirsti Hagen of Cedar Rapids; eight great-grandchildren, Cece, Eli and Grace Harer, Diego and Alma Garcia, Ana Carolina Brinkmann Martin, Caleb Buchheit and McCoy Hagen; and one sibling, Janice (Roy) Matthews of Charles City, Iowa.
He was preceded in death by his wife, LaRue (Lee) Hagen on May 8, 2018; daughter, Connie Brinkmann on Aug. 9, 2001; grandson, Nicholas Hagen on May 25, 2010; parents, Adolph and Myrtle (Moe) Hagen; grandparents, Asle and Dordi (Borseth) Hagen and Otto and Mina (Prestsater) Moe; and brother-in-law, David Lillegraven.