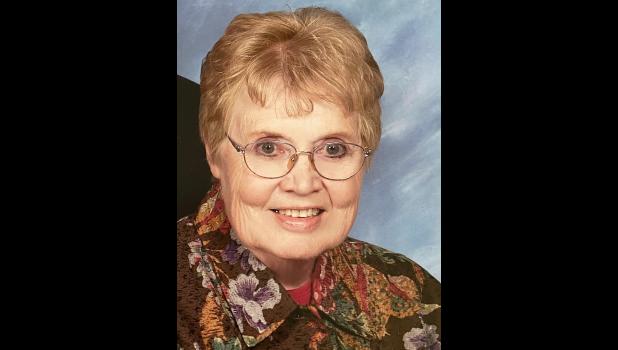 March 15, 1934 —
June 3, 2022
CRESCO - Mary Beth (Christianson) Brenno, age 88 of Cresco, Iowa passed away peacefully on Friday, June 3, 2022.
Memorial services will be held at 11 a.m. on Saturday, June 11, 2022 at Peace Lutheran Church in Ridgeway, Iowa. Visitation will be held from 3-6 p.m. on Friday, June 10, 2022 at Lindstrom Funeral Home in Cresco, and again one hour prior to services at the church on Saturday morning. Lindstrom Funeral Home is handling arrangements.
Mary was born in Webster City, Iowa, to Lyle and Ragnhild (Male) Christianson on March 15, 1934. She was the oldest of six children who grew up in Radcliffe, Iowa.
Mary was an exceptional student and hard worker who spent much of her career in accounting.
In 1952, she was united in marriage to Paul Siddell, with whom she had five children. In 1965, she married Walter Brenno, with whom she had three children. They lived in Ridgeway, most of their years together, until they moved to Cresco later in life. The couple were married for over 52 years and had 18 grandchildren and 16 great-grandchildren.
Mary was a beautiful soul, whose fun-loving and light-hearted love for life balanced her busy-bee hard working nature. She was very strong and independent.
She loved spending time with family and friends. When they visited her, she enjoyed cooking for them — her special pancakes were a big hit with the grandkids, and her homemade cinnamon rolls were a family favorite. In addition to enjoying cooking and baking, she enjoyed playing games and spending time visiting out on the deck, a central gathering place for many friends and family.
In her spare time, Mary enjoyed quilting, baking, gardening, walking, reading, completing puzzles, golfing and attending church or community events. Her faith was very important to her, and she was active in Peace Lutheran Church.
Looking through family photos, it’s evident that many of her current friendships spanned decades, back to her youth. She was always up for adventures, impromptu or planned, where she could enjoy the company of others. She joined several card clubs, including Bridge where she met new friends after moving to Cresco.
In the spring of 2021, Mary decided to move to Bishop Drumm retirement community in the Des Moines metro, where she was excited about all the new things to do and people to meet. She made so many friends; initiated pajama parties with the ladies on her floor where they giggled like school girls; played bingo often, one of her favorite activities; went on road trips to see her sisters, whom she cherished so many beautiful memories with; and enjoyed many parties and events with her family. She always had a carefree smile on her face. It was exactly what she wanted! In her final days, she was surrounded by family and friends.
Mary is survived by her children, Randy Siddell of North Adams, Mass., Larry (Roseanne) Siddell of Dodge, Wis. [and children, Daniel, Robert, Ryan, Madisen and Reed], Vicky (Jeff) Combs of Frisco, Texas [and children, Zach (Karla) and Andrew (Jennifer)], Terry (Mary) Siddell of Cedar Rapids, Iowa [and children, Josh (Staci), Kendra, Christine, Derek (Courtney) and Ana Maria (Blake), Elisa, Claudia and Andrea], Michael (Nadine) of Yuma, Ariz. [and Nicholas], David (Julie) Brenno of Cresco, [and children, Logan and Christopher], Jean (Craig) Clabaugh of Urbandale, Iowa [and children, Griffin (Macy), Gage and Blake] and Lori Brenno of Des Moines, Iowa.
In addition to her children and grandchildren, she is survived by 16 great-grandchildren; three sisters, Ruth (Robert) Blome, Helen Cady and Linda (John) Hess; sister-in-law, Ruth Christianson; brother-in-law, Lester (Arlowayne) Brenno; and many nieces and nephews.
Mary was preceded in death by her husband, Walter; her mother and father; brothers, Richard and James (Janet); grandson, Nathan Siddell; brothers-in-law, Donald Cady and Nayton “Adolph” (Irene) Brenno; and sister-in-law, Janet Brenno.