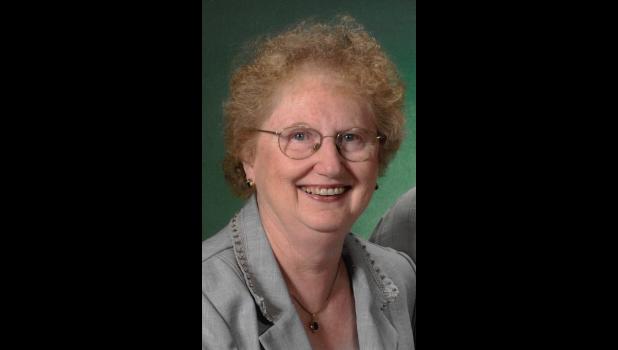 July 13, 1941 —
Sept. 22, 2021
CRESCO - Mary Ann Shea, age 80, of Cresco, Iowa, passed away on Wednesday, Sept. 22, 2021 at Regional Health Services of Howard County.
A Mass of Christian Burial will be held at Notre Dame Parish on Monday, September 27, 2021, at 11:00 a.m., with a one hour visitation from 10:00 a.m.-11:00 a.m. at the church.  Father David Schatz will be officiating.  Burial will be at Calvary Cemetery in Cresco.  Visitation will be on Sunday, September 26, 2021, from 4:00-7:00 p.m., with a Rosary at 3:30 p.m. at the Hindt-Hudek Funeral Home in Cresco, Iowa; parish scripture wake service to follow at 7:00 p.m.
Mary Ann Reynolds was born on July 13, 1941, in Howard County, Iowa, the only child of Clarence and Mary (McCarville) Reynolds. She was always so proud to have gone to school in Schley.
On July 2, 1966, she married Donald Shea at Assumption Catholic Church in Cresco. The couple farmed near Lime Springs, mostly beef cattle and hogs. She helped with daily chores and anything else that needed to be done on the farm. Mary Ann raised chickens and collected their eggs; which led to her large chicken figurine collection. In recent years, Mary Ann became parts runner for the farm.
She liked taking long Sunday drives with Don and continued their tradition after his death on March 7, 2020. Mary Ann was always on the go, taking her grandchildren to different school events and appointments with “Grandma’s Taxi Service.” She was very proud of all her grandchildren and enjoyed attending their events. She spent her leisure time quilting and embroidering.
Mary Ann is survived by her daughter, Vicki Shea of Rochester, Minn.;, sons, Dana (Carol) Shea of Lime Springs, Matt Shea of Lime Springs and Andy (Kelly) Shea of Platteville, Wis.; grandchildren, Caleb, Devyn, Bryce, Kinze, Kennedy, Keira and Luke; brother-in-law, Bob Shea of Blacksburg, Va.; sister-in-law, Betty Schatz of Cresco; brother-in-law, Neil (Jeannie) Shea of Hemet, Calif.; and sister-in-law, Betty Shea of Cresco.
She was preceded in death by her parents, Clarence and Mary Reynolds; husband, Donald Shea; son, Todd Shea; in-laws, Joe and Lucille Shea; brothers-in-law, Kenny Shea and Adrian Schatz; and sister-in-law, Laurie Shea.
Online condolences may be left at Hindtfuneralhomes.com.