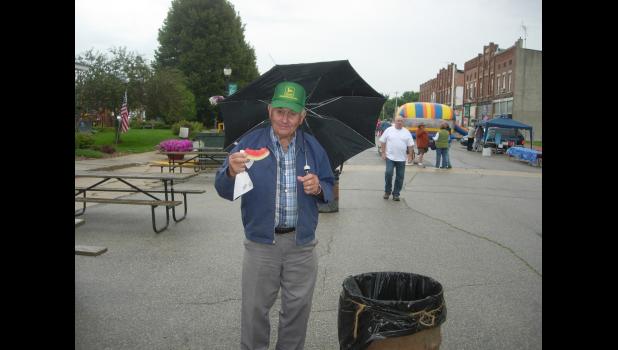 Sept. 9, 1927 —
Sept.23, 2019
CRESCO - Johnie Vobr, age 92, of Cresco, Iowa passed away on Monday, Sept. 23, 2019 at Evans Memorial Home in Cresco.
Funeral services will be held on Friday, Sept. 27, 2019 at 11 a.m. at Immanuel Lutheran Church in Cresco. Friends may call from 4-7 p.m. on Thursday, September 26, 2019 at Lindstrom Funeral Home in Cresco, as well as one hour prior to services at the church. Burial will be in the New Oregon Cemetery in rural Cresco.
Johnie was born on Sept. 9, 1927 to Charles and Mildred (Myrtl) Vobr in Cresco. He attended school through the eighth grade, then stayed home to help with the family farm.
He married Mildred Blaser on March 11, 1951 at the Little Brown Church in Nashua, Iowa. To this union one son, Robert, was born. They farmed near Cardinal Marsh, then moved to a farm near Granger, Minn., where they farmed for four years. They then moved to the “home” farm on March 1, 1958 east of Cresco. Johnie milked cows, raised hogs and chickens and enjoyed competing in corn and bean contests.
He was a long-time active member of Immanuel Lutheran Church and served as a council member, including the role of president. Johnie also loved to travel to numerous places in the United States, as well as Australia.
Following Mildred’s passing, he married Carol Hubka in March 2006. The couple loved to go dancing whenever possible.
In his spare time, Johnie enjoyed gardening, woodworking and taking any one of his grandchildren fishing. He loved to visit with anyone. He never met a stranger because he would talk to anyone about anything.
He is survived by his wife, Carol of Cresco; one son, Robert (Jean) Vobr of Cresco; two grandsons, Eric (Melissa) Vobr of Cresco and Jonathan Vobr of Cresco; 7 great-grandchildren, Joey, Jaylee, Garrett, Oakley, Everly, Keaton and Quinn; two stepsons, Gary (Meagan) Hubka of Decorah, Iowa and Steven Hubka of Cresco; six step-grandchildren, Riley, Carter, Chase, Parker, Laney and Caden; a brother, Raymond (Nora) of Cresco; a sister, Lillian Maroushek of the Twin Cities area; and a sister-in-law, Delores Vobr of Decorah; along with many nieces and nephews.
He was preceded in death by his parents; his first wife, Mildred; a sister, Viola Doubek; and two brothers, Edward and Elvin.