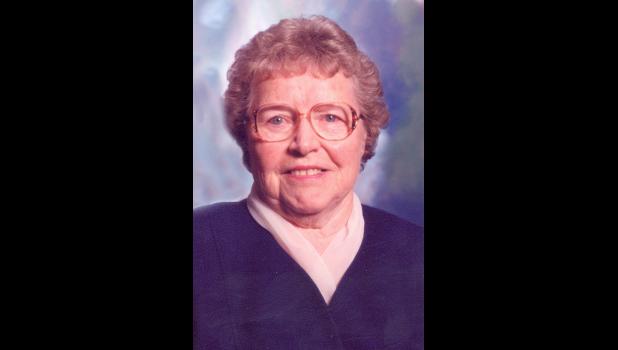 Nov. 25, 1927 —
Nov. 28, 2018
Lawler - Grace V. Reicks age 91, of Lawler, Iowa, died on Wednesday, Nov. 28, 2018, at New Hampton (Iowa) Nursing & Rehabilitation Center.
A Mass of Christian Burial was held on Dec. 4, 2018, at Our Lady of Mt. Carmel Catholic Church in Lawler, with Rev. Aaron Junge presiding. Interment was held in our Lady of Mt. Carmel Catholic Church Cemetery in Lawler. Online condolences for Grace’s family may be left at hugebackfuneralhome. com.
Grace Veronica Reicks was born on Nov. 25, 1927, on the family farm near Seneca, Wis., the daughter of William and Ida (Einck) Huinker. With the Great Depression following her school years and her father’s death, she worked on the farm near Ossian, Iowa and later in Chicago, all for her large childhood family. With Eugene Reicks, her new husband in 1949, she made a home and new family on a farm north of Lawler.
Grace raised eight children and worked on the farm whenever a hand was needed (picking rock, hauling wagons, pulling pigs, etc.), while maintaining the house and all that goes with it. She kept the books, kept the chickens, always had a large garden and was constantly sewing clothes for her family with her beloved Pfaff sewing machine (60 years and counting). She sewed at least 100 quilts with that machine and then hand quilted many of them. She was a devout Catholic and member of the Catholic Daughters for many years, as well as teaching humility and service.
Her cooking leaves lots of delicious memories with many family favorites, holiday specials and ‘field picnics.’ She enjoyed so many things — the kids and grands horsing around, Butch and her beloved Cubs, including many games in Chicago, fishing and playing cards every chance they could, bowling Thursday nights and trips with friends. There was never a dull or still moment.
It was important to Grace that all her children knew how to work hard and play hard. She set a good example for her children and taught them how to care for others. Above all, she did whatever was needed of her all through her long life.
Grace is survived by four sons, Allen (Judy) Reicks of Pella, Iowa, Duane (Penny) Reicks of Lawler, Mike (Jennie) Reicks of Lawler and Steve (Tammy) Reicks of Solon, Iowa; three daughters, Eileen (Gerald) Nelson of Eau Claire, Wis., Kathleen (Randall) Van Winkle of Farmington, Iowa and Leeann (Mark) Reicks of Anchorage, Alaska; 26 grandchildren; 25 great-grand- children; daughter-in-law, Sue Reicks of Decorah, Iowa; two brothers, William (Phyllis) Huinker of Postville, Iowa and Thomas (Joyce) Huinker of Festina, Iowa; brother-in-law, Alex Reicks of Lawler; one sister, Joanne (Francis) Wenthold of Ossian; and sister-in-law, Edna Huinker of Decorah.
She was preceded in death by her parents; husband, Eugene in 2012; son, Dave in 2004; two brothers, Charles and Ralph Huinker; five sisters, Lillian Hagaman, Alice Reicks, Catherine Moellers, Luella Reicks and Eunice Bushman; along with numerous brothers and sisters-in-law.
Memorials should be directed to the family.