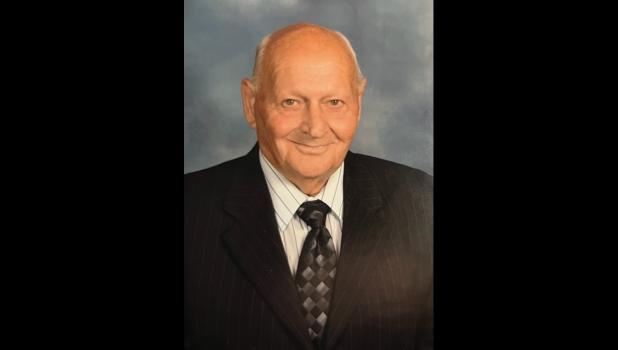 Dec. 25, 1936 —
Nov. 20, 2021
ELMA - Gerald (Gerry) C. McGee, age 84, of Elma, Iowa passed away on Saturday, Nov. 20, 2021 at Mitchell County Regional Health Center in Osage, Iowa after a short illness, with family by his side.
The family will follow Gerald’s health practices. There will be no public service at this time. A private memorial mass was held at Immaculate Conception Church in Elma, with Father Jerry Kopacek celebrating. There will be a public Celebration of Life held at a later date for friends and family.
Online condolences may be left at www.conway-markhamfh.com. Memorials may be directed to the family. The Elma Depot Museum and Elma’s Calvary Cemetery best represent his volunteer and charitable interests.
Gerald Charles was born on Dec. 25, 1936. This Christmas Day gift was welcomed by his parents, Charles and Ella (Knippling) McGee in Elma. He attended country schools and Elma’s IC Academy. Upon completion of his education, Gerald began his career in farming. Shortly thereafter, he found the love of his life, Marian Marr. The couple were united in marriage on Nov. 15, 1955 at Immaculate Conception Church in Riceville, Iowa. Together they made their home where they welcomed their five sons, Gerry, Larry, Terry, Garry and Perry.
Throughout the years, Gerald’s roles changed in his community. During his life as school bus driver or auctioneer, he was well known for a friendly wave, kind heart and as an empathetic listener. He was elected to the Elma City Council and served on many boards and committees. The couple was recognized for their contributions to Elma by being named grand marshals of the 2019 Old Roundhouse Trail Days parade.
Gerald was a long-time member of the Elma IC Church, KCs and Foresters. He loved baseball, with the Cleveland Indians being his favorite team and Bob Feller his favorite player. After three of his sons’ graduations from Iowa State University, he fanatically followed the Cyclones men’s and women’s sports programs.
He was a caring guide through the years – opening doors to relatives who needed sanctuary. Later in life, during his over 40 years of sobriety, he mentored many in the area with compassion and friendship. He cherished these relationships. This also gave him his “purpose in life.” Those who knew him knows he hopes those friends continue their paths without him by their side.
Gerald followed the best practices of science during the current pandemic. He sought the advice of his doctors and had both doses of the vaccine by early February 2021. As immunity waned and cases increased, he resumed masking, social distancing and avoiding crowded venues. He welcomed the chance to get the booster shot to help protect him and his loved ones. Ironically, the lack of ICU beds in Mason City, Austin and Rochester, because of COVID, may have contributed to the timing of his death.
He enjoyed traveling. Frequent weekend drives served as learning experiences. Several trips to Ireland included week-long stays at his paternal grandmother’s hometown of Graiguenamanagh, County Kilkenny. He also spent many weekends watching Perry’s marathon runs throughout the world.
Those left to cherish Gerald’s memory are his wife of 66 years, Marian of Elma; his five sons, Gerald Jr. of LaGrange, Ga., Lawrence of St. Ansgar, Iowa, Terrance (Theresa Andrews) of Charles City, Iowa Garry of Elma and Perry of Cresco, Iowa; his granddaughter, Tara McGee of Mason City, Iowa; brother-in-law, Dave Marr of Colonial Manor in Elma; sisters-in-law Bea Marr of Riceville, Val Marr of Del Rio, Texas, Hazel Boyle of Elma and Tami Marr of Osage; and numerous nieces and nephews.
He was preceded in death by his parents; sisters, Eileen Weber and Kathleen Meirick; brothers and sisters-in-law, Kenny Weber, Harold and Mary Lou (Marr) Koschmeder, Bob Marr, Pat Boyle, Tom Marr, Dorothy Ann Marr and Mary Ann Marr; nephews, Bob Weber, Bob Marr Jr. and Paul Marr; and niece, Linda Hosek.