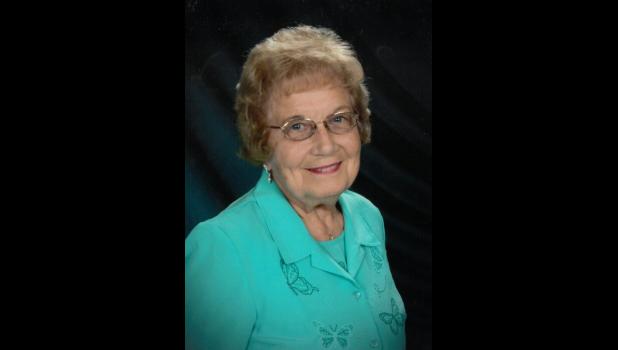 July 21, 1931 —
June 6, 2022
CRESCO - Loving mother and grandmother Edith Bigalk’s life didn’t come to an end with her death.
Edith, age 90, of Cresco, Iowa, passed away peacefully on June 6, 2022, after a courageous battle with kidney disease, surrounded by loved ones, who will continue to honor her legacy by living their lives to the fullest.
The family will greet visitors on Friday, June 10, from 5-7 p.m. at Hindt-Hudek Funeral Home in Cresco. A mass and Christian burial will be held at Notre Dame Parish in Cresco on Saturday, June 11 at 11 a.m. Edith will be laid to eternal rest at Calvary Cemetery. A luncheon will follow the burial at Notre Dame Parish. Memorials may be directed to Notre Dame Parish.
Edith was born on July 21, 1931 to Anton and Mary (Leferink) Reicks. She was raised on the family farm, where she learned the value of hard work with her daily chores feeding chickens and milking cows. She graduated from Cresco High School in 1949.
Edith met and fell in love with William Hruska, a friend of her brother, Bernie. The two were joined in marriage in 1949, and they made their homestead on a farm near Lourdes, Iowa. They were blessed with four children, Patricia, Shirley, David and Robert. Edith and the children moved to Cresco following William’s death in 1957. Strong, determined and fiercely independent, Edith worked very hard while raising her children as a single mother. She held jobs at the local grocery stores, The Red Owl and Jack & Jill, as well as waitressing at The Tower Club.
It was important to William that he was active in the kids’ lives, as he was raised by a single mother. After his unfortunate death when the children were young, Edith made many sacrifices to ensure the children were raised in a way that would make William proud, including enrolling the boys in Boy Scouts to learn the skills that she wasn’t able to teach them.
In 1965, Edith married Donald Bigalk. Shortly thereafter, she was able to fulfill her lifelong dream of attending cosmetology school. After graduating, she began her career as a hair stylist, eventually opening her own salon, Edith’s Beauty Shop. It was there that she provided her signature haircuts, perms and sets.
Edith loved spending her days socializing with her clients, many who turned into friends, while helping them look and feel their best. She had a stubborn streak, disregarding her kids’ suggestions to hang up her scissors and retire after 52 years. She had one very special client that she continued to see until shortly before her death.
The simplest pleasures in life brought Edith joy. In her younger years, she enjoyed bowling and dancing with William. She enjoyed crafts, sewing and reading. She also spent a great deal of time tending to her plants, yard and flowerbeds, often enjoying the birds that would visit her birdfeeders.
Edith loved spending time with her grandchildren, which included spoiling them with her infamous cinnamon rolls and scotcharoo bars. She was very proud of her children and grandchildren.
Edith was a devoted Catholic and member of Notre Dame Parish for most of her life. She enjoyed fellowship with her church community and volunteering at luncheons, as well as being a member of the Rosary Society. Reading the weekly church bulletin from front to back was something that gave her great joy.
Edith is survived by her children, Patricia Bronner of Gilbert, Ariz., Shirley (Greg) Robinson of Clarksburg, Mo., David (Sally) Hruska of Cresco and Robert (Teri) Hruska of Ruther Glen, Va.; grandchildren, Troy (Tasha) Hart of Cresco, Scott (Nichole) Bronner of Gilbert, Melissa Hilsenbeck of Sedalia, Mo., Sally (Justin) Martin of Clarksburg, Amy (Jens) Blessington of Ankeny, Iowa, Jessica Ferin of Des Moines, Iowa and Elena Hruska of Ruther Glenn; nine great-grandchildren, Gregory Hilsenbeck, Christian Hilsenbeck, Lacey (Dana) Kitchen, Levi (Jess) Hart, Lyndsi (Kendrick) Logan, Trevor Martin, Brili Martin, Mila Blessington and Zane Blessington; three great-great-grandchildren, Emery Ann Hilsenbeck, Winston Kitchen and Lincoln Kitchen; brother, Irvin (Norma) Reicks of Cresco; and several nieces and nephews.
She was preceded in death by her parents; husbands, William Hruska and Donald Bigalk; brothers, Leonard and Bernard (Ruth) Reicks; sister Rita (Edward) Hruska; and son-in-law, Raymond Bronner.