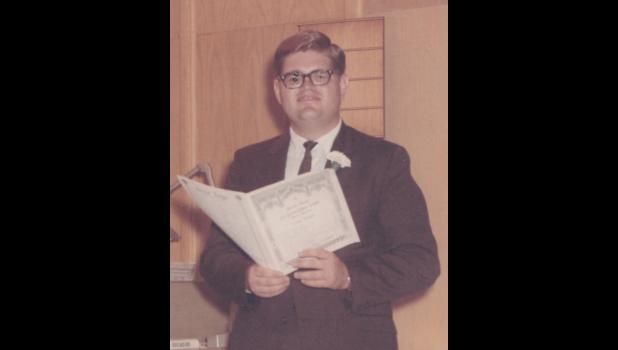 Sept. 26, 1943 —
June 26, 2022
FORMERLY OF CHESTER - Dr. Terry L. Eggerichs, age 78, formerly of Chester, Iowa, died on Sunday, June 26, 2022 at Cannon Rivers Senior Living in Cannon Falls, Minn.
A funeral mass was held at 11 a.m. on Thursday, June 30, 2022 at St. Patrick’s Catholic Church in LeRoy, Minn., with Father Marreddy Pothireddy officiating. Burial followed at Chester Hill Cemetery in Chester. Visitation will be held from 10-11 a.m. at the church prior to the service.
Online condolences may be left at Hindtfuneralhomes.com
Terry Lee Eggerichs was born on Sept. 26, 1943, the third eldest of nine children born to Harold and Luella Eggerichs. He grew up on a farm in Lime Springs, Iowa. His family moved to Goodhue, Minn. in 1959, where he graduated from high school.
Terry received a B.A. in chemistry from Winona State University and received a PhD in organic chemistry from the University of Nebraska. He worked at various jobs throughout the United States and Europe. He ended his career in Denver, Colo., where he managed the wastewater department.
Terry moved to Chester, in 2013 after retiring. He lived there until 2016, when he moved to Cannon Rivers Senior Living. He had a special interest in music. He had a wonderful voice and directed several choirs during his lifetime.
Terry is survived by his siblings, Robert (Joan) Eggerichs of Burnsville, Minn., Beverly Odegaard of Cottage Grove, Wis., David “Al” (Mary) Eggerichs of Mounds View, Minn., Mark (Debbie) Eggerichs of Stoughton, Wis., Anthony (Margaret) Eggerichs of Zumbrota, Minn., Peggy (Lee) Klokow of Lawrenceville, Ga. and Earl (Kellie) Eggerichs of Farmington, Minn. and many nieces and nephews.
He was preceded in death by his parents; youngest brother, James Eggerichs; and brother-in-law, Lawrence Odegaard.