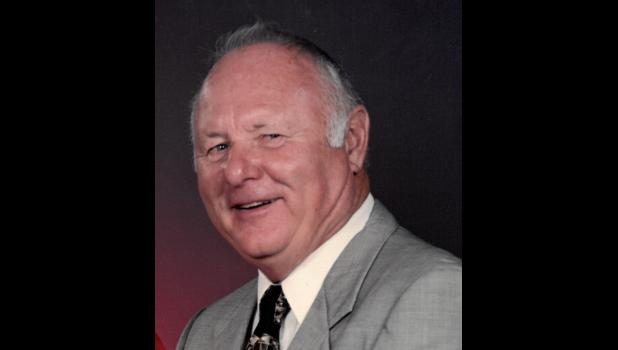 Aug. 31, 1933 —
Sept. 24, 2019
CRESCO - Donald “Don” Edward Gooder, age 86, of Cresco, Iowa, passed away peacefully on Tuesday, Sept. 24, 2019, at Evans Memorial Home surrounded by his family.
A Mass of Christian burial will be held at Notre Dame Catholic Church on Friday, Sept. 27, 2019, at 11 a.m. with Father Jacob Rouse officiating. Burial will be in Calvary Cemetery. Visitation will be held at Notre Dame Church on Thursday, Sept. 26 from 4-8 p.m., followed by a prayer service. Visitation will continue at the Church beginning at 9:30 a.m. prior to the service on Friday. Hindt-Hudek Funeral Home is assisting the family.
Don was born on Aug. 31, 1933, to Niles and Ruth (Slifka) Gooder in Waterloo, Iowa, and was raised by a single mother, his grandmother and two uncles. He graduated from Cresco High School in 1951, served in the United States Marines, and married Rose Ella “Rosie” Slifka on Sept. 19, 1953, at Assumption Catholic Church in Cresco.
Though Don was raised in town, he and Rosie began their marriage with a short stint in farming. This was the first of a long list of entrepreneurial endeavors related to agriculture, real estate and business development in which Don pursued his desire to succeed.
Influenced by many people in the Cresco community as a young man, he enjoyed crediting much of his success to the guidance he received from numerous local mentors including Arnie Kratz, Neil McKone, Bob Howard, Ralph Fitzgerald and George Laub, as well as many others who all shared a passion for Cresco’s success. Don loved his community and wanted it to thrive, creating phrases such as “Cresco, the heart of the nation,” meaning every word.
At the age of 29, he purchased a Ford franchise in Cresco, later building it into a “state of the art” dealership. During this time, Don’s interests and involvements included stock cars, snowmobiles and quarter midget racing with the boys. In 1972 Don and Rosie decided to pursue farming, when a family farm in Vernon Springs was listed for sale. In character, Don went against the grain, deciding to focus on a commercial sheep operation, which over time evolved into purebred Columbia and Rambouillet sheep flocks. The success of this enterprise led to winning Premier Breeder at the International Livestock Exposition five times along with numerous other awards and recognitions. In addition, Don earned his broker license to pursue his life-long interest in real estate. For decades he held the Iowa state record for the largest farm land transaction.
In the early 1970s, Don helped found Cresco Industrial Development Corporation (CIDC), became its first director and helped to lead the growth of Cresco industry to an all-time high. A few of the businesses included Donaldson, ADS Plastics, and other businesses throughout the county.
Cresco’s reputation as one of the country’s leading trailer manufacturing centers is the direct result of the couple’s successful sheep business because of their need to transport sheep to eastern markets. Realizing the potential of aluminum livestock trailers, Don convinced Roy Culp to partner with him to build the Featherlite plant. Don told him, “I will take every trailer you can build.” As a result, Don Gooder Distributing became the nation’s largest dealer of aluminum stock and horse trailers for many years. In years to come, this business evolved into Alum-Line, which from the start has involved two of his sons. Don’s business legacy in Cresco lives on.
In retirement, the couple owned a second home on the Mississippi River in Guttenburg, Iowa, where he was again developing real estate including retail buildings and homes.
Throughout his life, Don enjoyed pushing boundaries, taking risks and leading by example. This “no fear” attitude led to his development of numerous professional and community ventures. In part this included Heritage Supper Club, Sport Hut, founding of Driftrunners and Snow Fest, Ag Fest and leadership involvement with community organizations such as Jaycees, Centennial Committee, Chamber, Church Council, Hospital Board, Historical Society, Fair Board, and the list goes on.
He is well-known for his passion and connection to amateur wrestling. Attendance at the NCAA Division I Championship started with him and friends following Cresco native, Tom Peckham’s notable career. As a testament to Don’s love for the sport of wrestling, he was the last surviving founder of the Iowa Wrestling Hall of Fame.
Don was known for his one-of-a-kind personality, relentless work ethic, commitment to excellence, affectionate humor and living life to its fullest. His crowning achievements however, are exemplified in his devotion to family and friends, and his life-long love and commitment to his wife of 66 years, Rosie. As he loved to say, “Enough said!”
Don is survived by his wife, Rosie of Cresco; children, Patrick (Becky) Gooder of Decorah, Iowa and their children, Shay Gooder, Chris (Coletta) Gooder and children, Adelina, Leo, and Judelyn and Dakota (Bryce) Hruska and daughter, Arietta; Michael (Rachel) Gooder of Cresco and their children, Abby (Dan) Inglis and son, Wyatt, and John (Molly) Gooder and daughter, Ella; Gary (Sara) Gooder of Cresco and their children, Sydney Gooder-Hayes and children, Paxton and Summer, Josie (Brian) Hrdlicka and daughter, Maelyn, and Sierra Gooder; Lee (Jill) Gooder of Cresco and their children, Shelley (Joe) Marshall and Zach (Katie) Gooder and daughter, Autumn; and Gay Duroe of Cresco. He is also survived by a brother, Ross “Bill” Gooder of Cresco.
He was preceded in death by his parents, Niles and Ruth; a son in infancy, John Gooder; and son-in-law, Michael Duroe.
Donations can be made in Don’s name to the Iowa Wrestling Hall of Fame.
Condolences may be left online at www.hindthudekfuneralhomes.com