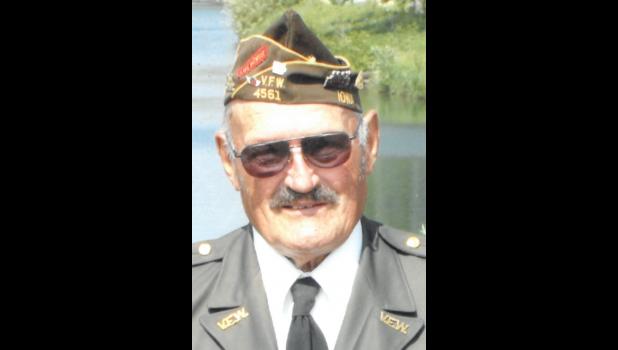 Full obituary
Sept. 20, 1927 —
May 9, 2022
CRESCO - Denis D. Reicks, age 94, of Cresco, Iowa died on Monday, May 9, 2022, at the Patty Elwood Center in Cresco.
Mass of Christian Burial will be held at 10 a.m. on Saturday, May 14, at Notre Dame Catholic Church with Fr. Jacob Rouse officiating.  Burial will be in Calvary Cemetery in Cresco.  Visitation will be held from 4-7 p.m. on Friday, May 13, at Hindt-Hudek Funeral Home in Cresco.  The visitation will continue at the church from 9-10 a.m. on Saturday.
Denis D. Reicks was born on Sept. 20, 1927, to Raymond and Mary (Baumler) Reicks, in Howard County, Iowa. He grew up and attended school in Howard County, where he lived until he joined the U.S. Navy in 1945. Denis served on the USS Tutahaco, which was a WWII era tugboat. He was honorably discharged in 1949,and began working for Rath Packaging in Waterloo, Iowa.
While there, Denis met the love of his life, Kathryn “Katy” Christianson.  On Sept. 18, 1951, the couple married at St. John’s Catholic Church in Waterloo.  They moved back to the Cresco area, where they bought and operated a dairy farm.
Denis was hard-working but also knew how to have a good time.  He belonged to pool and bowling leagues, liked to play cards and enjoyed having a cold beer.  He had a love for the land and taught his children many things about nature while out walking in the woods.
After retiring at the age of 70, Denis took trips to the boat to try his luck.  He also liked to travel the northwest territory and spend time in the mountains.
He was a VFW and American Legion member.  He volunteered several years as the VFW commander and attended every military funeral service until his knees gave out.  His first time on an airplane was in 2014, when he had the opportunity to participate in an Honor Flight trip to Washington, D.C.
Denis is survived by his children, Sandy (Bernie) Mathews of New Hampton, Iowa, Pat Ahern of Cresco, Barb (Dave) Schmauss of Eagle Grove, Iowa, Dave (Faye Kozelka) Reicks of Decorah, Iowa, Lori (Dave Goodell) Reicks of Williamsburg, Iowa and Dean Reicks of Cresco; daughters-in-law, Sharon (Bob Cox) Reicks of New Hampton and Debbie Reicks of Kendallville, Iowa; 34 grandchildren; 65 great-grandchildren; 12 great-great-grandchildren; sister-in-law, Phyllis Carter of Cedar Falls, Iowa; brother-in-law, Ronald Christianson; and many nieces and nephews.
He was preceded in death by his wife, Katy on May 24, 2009; three sons, Mike in 1993, Bill in 2016 and Al in 2021; son-in-law, Mark Ahern in 2014; two grandsons, Scott and John; great-great-granddaughter, Zeva; his parents, Ray and Mary Reicks; brothers and sisters, Rufina (Francis) Lickteig, Tarsilla (Ray) Hyberger, Cleo (Catherine) Reicks, Nestor (Dolly) Reicks, Del (Monica) Reicks and Geneva (Lyle) Houdek; father and mother-in-law, Alvin and Ilene Christianson; and brother-in-law, Tom Carter.