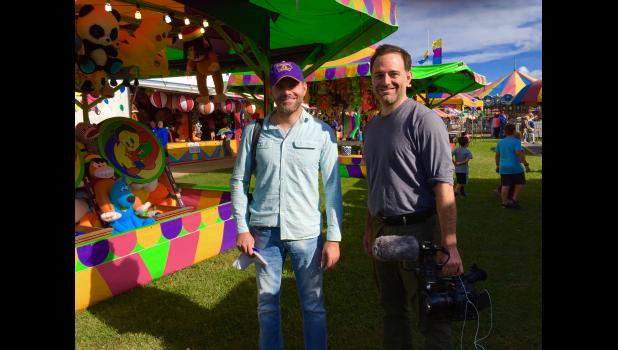 By:
Marcie Klomp News Editor tpdeditor@crescotimes.com
Howard County - There is a pair of brothers who will be traversing the United States over the next three-and-a-half years, talking to people at the grass roots level, trying to figure out how President Donald Trump won the election in 2016.
They are specifically chatting with individuals in counties that flipped from how the majority voted in 2012 versus 2016.
Locals might have seen Dan Allott, former Washington Examiner’s deputy commentary editor, and twin brother Jordan, documentary filmmaker, at the Mighty Howard County Fair. If you missed them, they will be back at the fair in 2018, 2019 and 2020 and even in-between times. They plan to return for RAGBRAI®’s overnight stop in Cresco on July 27.
Howard County is just one of nine counties around the country they are featuring in their series. They are talking to locals and telling their stories. Counties that flipped from Democrat to Republican, such as Howard include Robeson County, N.C.; Erie County, Pa.; Trempealeau County, Wis.; Macomb County, Mich.; Coos County, New Hampshire; and Volusia County, Fla.
Orange County, Calif. and Salt Lake County, Utah flipped from Republican in 2012 to Democrat in 2016.
“We didn't choose just the ones that saw the biggest flips from Obama to Trump. Seven are Obama-Trump counties but two of them (Orange and Salt Lake) actually voted for Clinton after going for Romney in 2012,” Dan explained.
“In general we chose counties that are crucial to Trump winning the election or important to understanding the Trump phenomenon,” he continued. “But each county will allow us to discuss different issues - Coos has a big problem with opioid, for instance. Then there is Orange County, which  used to be a bastion of conservatism in the midst of a liberal state, but Trump’s unpopularity there and an influx of Hispanic immigrants may mean Republicans will have no influence in the state for the foreseeable future.”
Dan said it was pretty clear after the 2016 election the flippers played a big part in Trump winning. “The journalists didn’t go into it. We are trying to understand what happened.”
Jordan added, “We want to give these people a voice. We want them to tell us, ‘These are our priorities. These are the issues.’”
They hope to run across some of the same individuals each time they return to an area, where the brothers will ask if their feelings for Trump have changed since the 2016 election.
So far, the Allotts have written about stops in Robeson County, N.C. and Erie County, Pa. Howard was their third stop. A person can check out their progress at 2020washingtonexaminer.com. There is also a spot to get notified when a new story comes out.