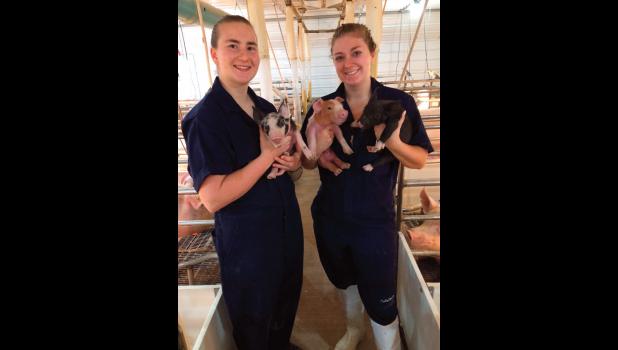 By:
Marcie Klomp News Editor tpdeditor@crescotimes.com
Chester - What does a city girl from Plainfield (40 miles from Chicago), Ill. have in common with a country girl from LeMars, Iowa?
The answer is pigs.
The two Iowa State University students became chummy over the past few months doing research for one of the Reicks View Farms hog barns.
Zoe Kiefer, the city girl, and Emily Pratt, the country girl, participated in a research internship from May until the end of July.
Kiefer explains their project was to introduce Tonisity PX into the piglets’ diet. “It is basically Gatorade® for pigs. We’re looking at how it affects the piglets.” It is supposed to lower death rates, increase weight and help with digestive health.
Her main interest is the research itself, as well as analyzing what she has learned. She is planning to expand on that part in her graduate studies.
She says she gets a lot of raised eyebrows when she tells friends and relatives about her work, but says it is a perfect time to explain how much better the experience is for the pigs. “Confinements are not harmful for pigs. They beat each other up in other pens. In the barns it is easier to see if a pig is sick. Overall living in the barn is better for the health and welfare of the pig.”
Pratt, whose future plan is to become a swine veterinarian, is not a newbie like Kiefer when it comes to pigs, but she didn’t grow up with them either. “My dad raised pigs when I was little, but I don’t remember them. He encouraged me to raise them for 4-H. I showed pigs at the Plymouth County Fair. From then on, I knew I wanted to do something with pigs.”
She did a little work at the Ag Education Center during Howard County Fair and was happy to see the kids being interested in the pigs. “Most town kids don’t get the experience. They don’t know how animals are raised. I think it’s great that Reicks’ helped with that. Pig farmers are not bad people.”
The girls’ research will hopefully give pig farmers more insight into how to keep their animals healthy. The current loss of piglets is at 13.5 percent. Kiefer said the percentage for free range pigs would be a lot higher.
She noted the air filtration systems help with disease and help minimize the smell and things are kept clean. There is a strict shower in/shower out policy. This makes sure no diseases are being brought in or out of the hog barns.
The duo live in a trailer on the farm near Chester. Pratt said her favorite part of the job is “working with pigs and coworkers. We have a good time.” Kiefer agrees.
Farming trends have certainly changed over the past 50 years. In 1960, an acre of corn in Iowa produced 63.5 bushels. In 2009, that amount tripled to 187 bushels per acre.
The same is true for raising swine. The number of surviving piglets per sow has increased over the years, and these pigs are helping to feed the world.
With caring individuals like Kiefer researching and Pratt doctoring the animals, the future looks bright for the swine industry.